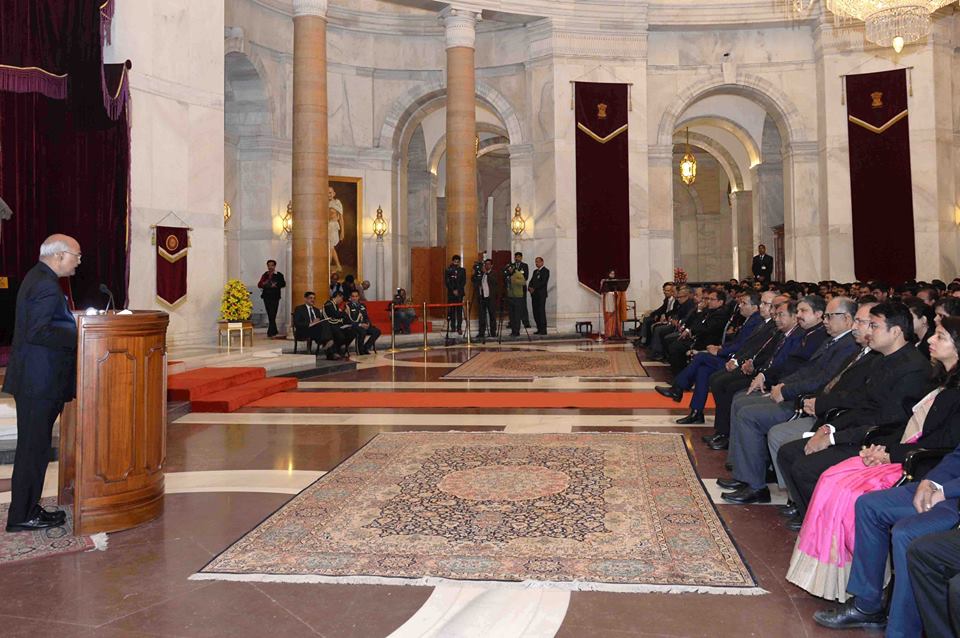 Probationers of different railway services call on the President

Speaking on the occasion, the President said Indian Railways is an institution for national service and nation building. In 2015-16 alone, Indian Railways serviced over 8 billion ‘originating passengers’. The Railways moves our industrial and agricultural freight, defence equipment and military personnel. The rail network also helps to maintain and spread our cultural heritage and traditions. Be it by mean of special trains run to accommodate the rush for the Kumbh Melas or the majestic ‘Palace on Wheels’ that captures the imagination of people around the globe.

The President said that trains are emerging as a means of mass rapid transport within our cities. Metro projects are being adopted by more and more cities in a bid to provide fast, secure and affordable urban connectivity. This will also help to de-clog our cities and reduce our carbon footprint.

The President reminded the probationary officers that they have joined an institution that provides them a unique opportunity to serve the nation and millions of citizens each day. He urged them to lead a life of optimism and develop a sense of positivity. This will allow them to make meaningful changes both at their work places as well as in society at large. It will also allow them to nurture a spirit of innovation and emerge as solution providers.

1st PIO-Parliamentarian Conference was inaugurated by Prime Minister of India

University of Nottingham: Untold stories of bear bones, sound postcards and a giant…

University of Nottingham: Festival of Science and Curiosity back for seventh year

iednewsdesk Jan 22, 2022
Professor Chapple, currently Head of Research at the University’s Institute of Clinical Sciences and a Consultant…

University of Nottingham: Study will examine extent of pollutants left…

KTH Royal Institute of Technology: Growing ratio of women to men in…

University of Southampton: Impact of the pandemic on rural shopping…