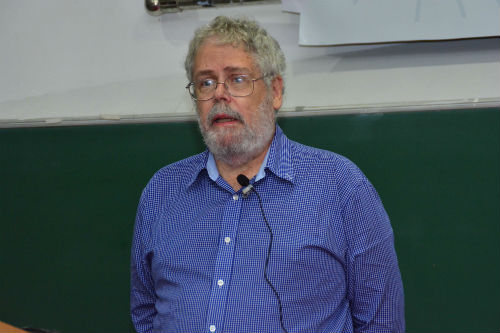 Modern Artificial Intelligence, powered by Machine Learning and Big Data, has had a large impact on the IT industry and is spreading to other sectors of the economy. However, not all data are equally useful; for example, data with both detailed observations (inputs) and known outcomes (desired and undesired outputs) is most useful for predictive tasks, but often data is noisy, incomplete and outcomes are at least partially unknown. New machine learning methods are needed to cope with such data, complementing the current wave of deep learning. Prof Carbonell addressed proactive learning, multi-task learning, and their applications.

Speaking on Prof Carbonell’s visit Vasudeva Varma, Prof & Dean, Research, IIIT-Hyderabad said, “Kohli Center on Intelligent Systems (KCIS), the most happening academic research center in Artificial Intelligence in India, regularly invites pioneers and torchbearers of the field to learn from their experience and benefit from their vision. Prof. Carbonell is one of the most celebrated researchers in the area of AI and Natural Language Processing, whose work has made a huge impact on research and commercial offerings available today. IIIT Hyderabad is very proud to host him and have the local academic and industry leaders to benefit from this event.”

University Professor and Allan Newell Professor of Computer Science Jaime G. Carbonell joined the Carnegie Mellon community as an assistant professor of computer science in 1979, and has gone on to become a widely recognized authority in machine translation, natural language processing and machine learning. Carbonell has invented a number of well-known algorithms and methods during his career, including proactive machine learning and maximal marginal relevance for information retrieval. His research has resulted in or contributed to a number of commercial enterprises, including Carnegie Speech, Carnegie Group and Dynamix Technologies.

Carbonell’s career has had an enormous impact on both Carnegie Mellon and the School of Computer Science. He created the university’s Ph.D. program in language technologies, and is co-creator of the Universal Library and its Million Book Project. He founded CMU’s Center for Machine Translation in 1986 and led its transformation in 1996 into the Language Technologies Institute, which he currently directs. He has advised more than 40 Ph.D. students and authored more than 300 research papers.

Before joining the Carnegie Mellon faculty, Carbonell earned bachelor’s degrees in mathematics and physics at the Massachusetts Institute of Technology, and his master’s degree and Ph.D. in computer science at Yale University.

Education and Skilling are the most focused areas of GMR Varalakshmi Foundation: Meena Raghunathan