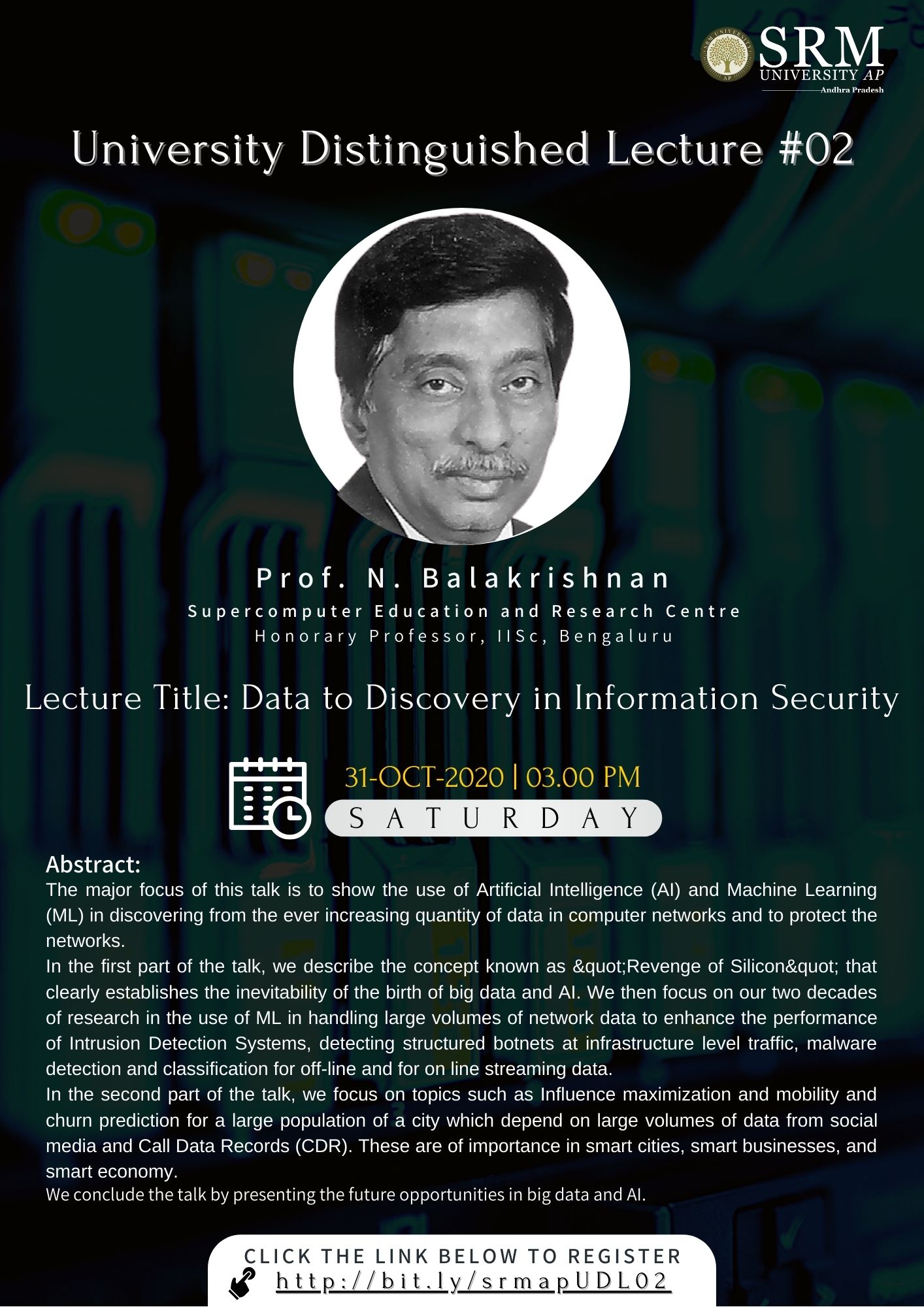 Bangalore: Prof N Balakrishnan, Honorary Professor, SuperComputer Education and Research Centre, Indian Institute of Science (IISc.), Bengaluru, delivered an enthralling talk on “Data to Discovery in Information Security” under the auspices of University Distinguished Lecture Series organized by SRM University – AP, Andhra Pradesh. Prof V S Rao, Vice-Chancellor, along with Prof D Narayana Rao, Pro Vice-Chancellor, and the conveners welcomed him. Extending his warmest welcome, Prof V S Rao emphasized on the significance of Data and Information Security and the great interest and concerns it imposes in recent times as well as the future. He says, “In the last two decades, data security concerns have increased exponentially along with emerging data reserves. Abundance of data without proper security poses more threats than solutions.” On that note, he requested Prof N Balakrishnan to enlighten the audience on various issues pertaining to raw data security.

Artist expresses the universality of emotions and human…

Prof N Balakrishnan’s lecture encompassed the explosion in data and the “Revenge of Silicon”, which made the emergence of Artificial Intelligence inevitable. He emphasized on the storage revolution which is reflected in the smaller systems comprising more complex networks, as compared to the earlier version of computers which were used primarily for computing and processing. He enlightens, “Characterized by explosion in velocity, volume, and variety, the data generated by humans and machines coexist in the big data scenario. Earlier, we spoke of the convergence of Information and Communication Technology (ICT), and now we have moved ahead with Nano, Bio, Info, and Cogno (NBIC) convergence.”

Prof N Balakrishnan dedicated the second half of his lecture by explaining the “Revenge of Silicon”. He used the periodic table to explain that although Carbon and Silicon belong to the same 4th group in the periodic table, mankind preferred Silicon over Carbon. Further, the paradigm shifted with the advent of computers which were programmed to mimic humans. In addition, the communication revolution resulted in its enhanced capability along with numbers. Presently, 1.72 billion websites are operative, there are billions of mobile phone users, the Internet of Things (IoT) have been established, wireless networks, and other complex systems. Dr N says, “Technology has become an integral part of the society with emerging Cyber-physical systems, and social networks. In the near future, computers would begin behaving more and more like humans, which is referred to as the Revenge of Silicon. Further, NBIC will enable biological complex systems (human body parts) to be replaced by silicon engineered parts, heralding towards a new doctrine.”

Drawing examples from his research sprawled across four decades, Prof N Balakrishnan expressed concerns about the tremendous data being stored and used across networking platforms. He explains, “Data storage speed doubles every 9 months. All the information known to mankind since the beginning of civilization can be stored in a single computer. The social network of computers has its negatives in the form of terrorism which has recently entered the computer world. Security of such a world is an important issue.” Prof N Balakrishnan concluded his lecture by stating that mathematical predictive models can be used for a better understanding of the data attack detection. He established that Community Detection based BOTSPOT will provide a faster detection algorithm to estimate attacks thereby aiding concerns of data attacks.

iednewsdesk Apr 12, 2022
Investors and entrepreneurs are key players in developing technology for people at DTU. In order for technology…

Technical University of Denmark: The potential of plastic can be…

University of Nottingham: Civilians and military to take part in major…