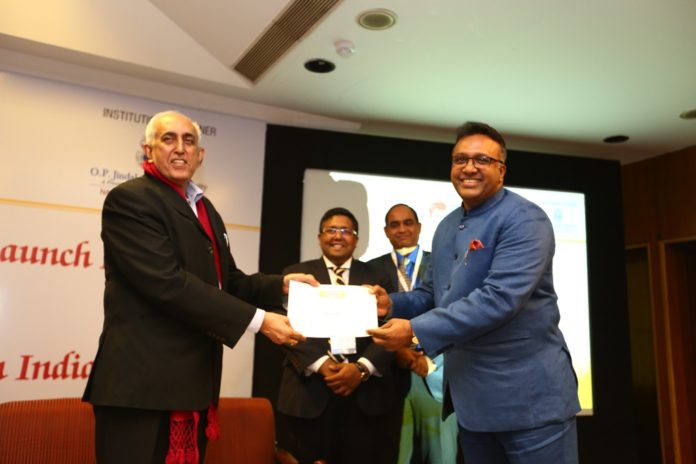 New Delhi, November 23, 2017: The interdisciplinary O.P. Jindal Global University (JGU) has been ranked among the Top 10 Private Institutions in India by QS University Rankings: BRICS 2018 edition. JGU became the YOUNGEST Indian University and also the FIRST and ONLY private university in Haryana to have been ranked in an international ranking.

Based on eight performance indicators, namely academic reputation, employer reputation, proportion of staff with a PhD, faculty/student ratio, research publications and citation rates, and proportion of international faculty and students, the ranking provides insights into the relative strengths and weaknesses of leading institutions in these five fast-developing economies.

Sharing his thoughts on the accomplishment, JGU’s Founding Chancellor, Mr. Naveen Jindal said, “It is an extraordinarily proud moment for JGU as well as for Haryana to enter into the prestigious QS Rankings. The entry of Indian universities into international rankings have created new opportunities for not only the ranked higher education institutions but also in providing models of excellence for Indian higher education. Given India’s demographic profile and the country’s developing context, there is an urgent need for greater CSR investments and philanthropic donations to be made in education in India. This will be imperative to raising the quality of higher education in India. Indian higher education institutions will need to draw from the experiences of leading global universities. There is a conscious need based upon a sense of conviction and purpose to build institutions of global excellence at a level which can compete with international institutions. The Jindal Group inspired by the vision and farsightedness of its founder Shri O.P. Jindal is deeply committed to promoting corporate philanthropy through CSR and other social initiatives. JGU is an exceptional example of how CSR can contribute to nation building.”

Talking about the achievement and JGU’s commitment to global higher education, Professor (Dr.) C. Raj Kumar, Founding Vice Chancellor, JGU, said, “This is an extraordinary accomplishment for a young university, which has just completed eight years since its founding. We have pursued and succeeded in developing the broadest possible framework of international collaborations that has enabled JGU to partner and work with over 200 universities and higher education institutions spread across over 50 countries in the world.

The growth and evolution of JGU as an institution of global excellence is also matched with the expansion of the schools and the programmes. JGU is an inter disciplinary university offering a curriculum that helps the students to pursue a range of learning opportunities through rigorous classroom teaching, effective clinical programmes, experiential learning and research and writing work.

Our institutional commitment and global aspiration reflects through the fact that over 20% of our faculty are non-Indian nationals recruited from 20 different countries who are engaged in innovative teaching pedagogy and research driven by a mission to contribute to excellence.

The future of Indian universities will depend upon how effectively we address the challenges of providing access to high quality education for a large number of young people while promoting aspirations to build institutions of global excellence.”

The Vice Chancellor also stressed on the need to establish world-class private universities in India which are top ranked in the world and are reputed for excellence in teaching, research and capacity-building. “JGU has been established as a not for profit institution with the view to promoting excellence in higher education and it is fulfilling to see our efforts being acknowledged at a global level.”

The release of the QS University Rankings: BRICS 2018 comes at a time when the Government of India has invited proposals from eligible higher education institutions in the country to apply to be designated an ‘Institution of Eminence’ under the Government’s efforts to build world class universities in India.

Dr. Harsh Vardhan said while handing over the letters of appreciation to 10 Doctors & Nursing Officers, part of Wuhan evacuation team