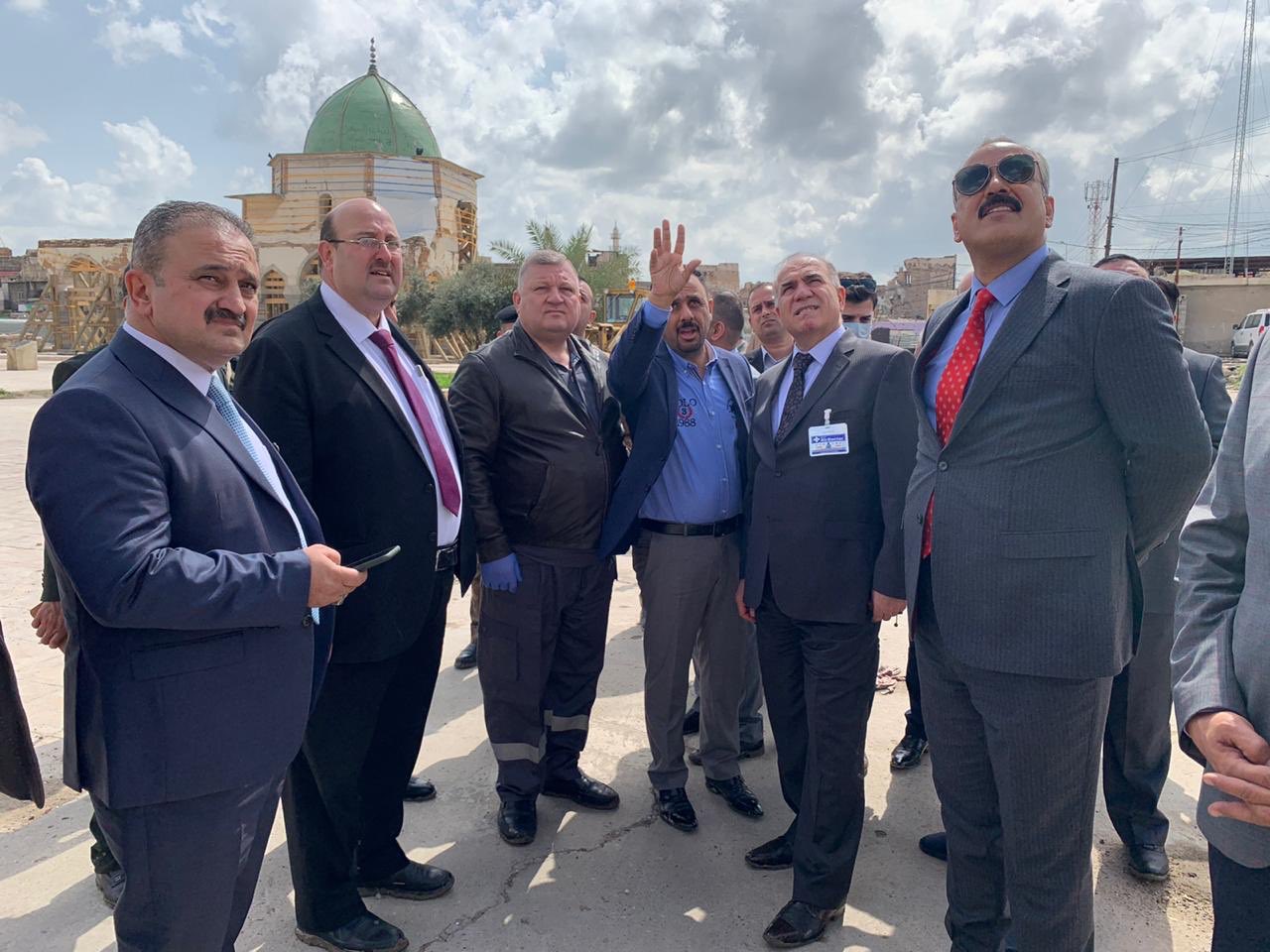 The Joint Steering Committee of UNESCO’s rehabilitation and reconstruction project of the Al Hadba Minaret and the Al-Nouri Mosque of Mosul on Tuesday determined future steps for the reconstruction of the two architectural landmarks of the Old City of Mosul (Iraq).

The decision, taken during the third session of the Steering Committee, marked the launch of the second phase of UNESCO’s Revive the Spirit of Mosul initiative.

Following the meeting, UNESCO Director-General Audrey Azoulay said that “today marks the culmination of many months of hard work, but also of cooperation, dedication and determination to ensure that we all move ahead together, side by side, to revive the spirit of Mosul. At the end of phase one of the reconstruction of the Al-Nouri Mosque complex, I wish to reiterate UNESCO’s firm commitment to the successful implementation of the project for Mosul, for Iraq, and for the world.”

Acting for the Committee, UNESCO will launch an international architectural competition for the reconstruction of Al-Nouri Mosque. The competition will take on board the input of the residents of Mosul who will be invited to take part in a large-scale consultation concerning the main reconstruction options for the Minaret and the Mosque. The timetable of these activities will depend on the ongoing response to COVID-19 in Mosul.

The second phase of the Revive the Spirit of Mosul Project involving the consolidation of the remaining base and reconstruction of the Minaret and Mosque, will begin once field and soil investigations are completed and after an extensive consultation with the local community on the design of the edifice and on whether to make the Minaret lean to one side as the original did.

At this stage, the Joint Steering Committee endorsed the reconstruction of the Al Hadba Minaret in its original location and opted for an intermediate solution for Al Nouri Mosque, aimed at maintaining the visual aspects of the building as it was before its destruction in 2017.

Recalling that “Al Nouri Mosque is a cultural asset, an archaeological and historical monument,” Iraq’s Minister of Culture expressed “a strong desire to maintain the authenticity of Al Nouri Mosque with the least of modification.”

The project, supported by the United Arab Emirates (UAE), aims to restore and reconstruct the historic landmarks of Mosul, notably the emblematic Al-Nouri Mosque and its celebrated, 45-meter tall leaning Al-Hadba Minaret, built more than 840 years ago. This historic and defining structure was all but leveled by violent extremists who occupied the city from 2014 to 2017. The project also provides employment opportunities and job training. It is an integral part of UNESCO’s flagship initiative Revive the Spirit of Mosul, launched in February 2018, as the Organization’s response for the recovery of one of Iraq’s most iconic cities, through the revival of education, heritage and cultural life.

Noura bint Mohammed Al Kaabi, the United Arab Emirates’ Minister of Culture and Knowledge Development of the United Arab Emirates (UAE) welcomed progress in the reconstruction project saying, “we have come a long way since the project’s inception. This progress would have not been possible without the relentless efforts made by the technical committee and the steering committee. […] We have witnessed significant developments on the ground. Al Nouri Mosque represents a historical and a cultural asset.

“We are all aiming at the same goal […] and we shall agree on the principle of safeguarding this Cultural Heritage. This project has invested a great deal in the local community. We will continue to engage Maslawis throughout the process and are committed to train and hire more Iraqis in the project.”

Tuesday’s meeting of the Joint Steering Committee marks the end of the first phase of the project that began in early 2019 and lasted a year. It consisted of clearing and demining the site, documenting and assessing it, stabilizing parts that could be salvaged as well as overall planning.

In October 2019, UNESCO, the UAE and the Government of Iraq agreed to undertake the reconstruction of two churches in the Old City of Mosul: the Al-Tahera Syriac Catholic Church and the Conventual Church of Our Lady of the Clock, with a view to reviving the cultural diversity that has characterized the history of Mosul over the centuries.

The President of the Sunni Waqf of Iraq, Saad Kambash for his part said that “rebuilding Al-Nouri Mosque, Al-Hadba Minaret and Al saa’a and Al Tahera Churches, is an essential part of the process of reviving the Spirit of Mosul and spreading hope to enhance the community cohesion”

Due to the COVID-19 pandemic, the third meeting of the Joint Steering Committee was held virtually. It was co-chaired by the Minister of Culture of Iraq, Abdulameer Al-Hamdani, Minister of Culture and Knowledge Development of the United Arab Emirates (UAE), Noura bint Mohammed Al Kaabi, and the Assistant Director-General for Culture of UNESCO, Ernesto Ottone R., with the participation of the President of the Sunni Waqf of Iraq, Saad Kambash, the Representative of the Christian Waqf, Safaa Saffo, and Nicolas Tixier, of the Provincial Dominican Order.

The Assistant Director-General for Culture of UNESCO, Ernesto Ottone R., for his part said that “Mosul always was a crossroads of cultures, proud of its identity and diversity. The project underway pays tribute to the courage of the Moslawis who, spontaneously, in the face of violence, formed a human shield to protect their common heritage.”

Launch of e-Learning course on Gender Equality at UNESCO

iednewsdesk Dec 1, 2021
The representatives of Polytechnic university received letters of gratitude from the Committee on Interethnic…

SPbPU: Polytechnic University at the Forum of Employees of…

SPbPU: Polytechnic expert talks about the effective promotion of the…

SPbPU: Polytechnic University will be the first Russian university to…