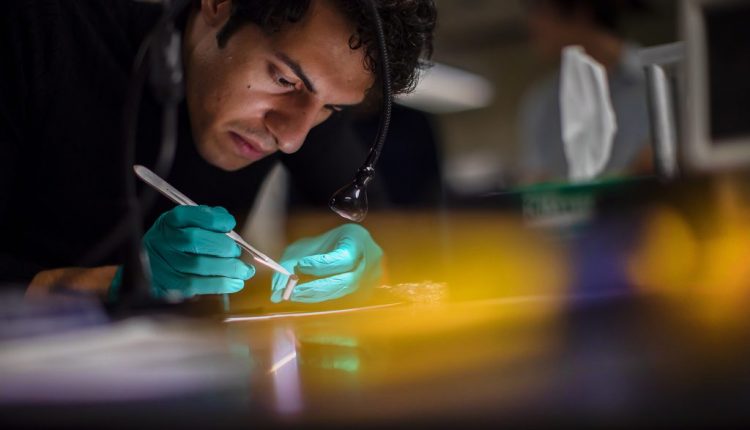 Research from the lab of Igor Bargatin, associate professor in the Department of Mechanical Engineering and Applied Mechanics, is really starting to take off.

The Bargatin Group is interested in engineering nanoscale features on ultra-lightweight materials, finding the ideal combination that will allow those materials to lift themselves into the air using the energy provided by light.

This method of propulsion, known as photophoretic levitation, is not a new concept, but it has mostly been applied to microscopic objects. Bargatin and his colleagues, however, have demonstrated its potential for use in atmospheric probes by lifting small payloads with their “nanocardboard” flyers. Like paper cardboard, these ultra-thin plates of aluminum oxide gain stiffness from internal corrugations, but those corrugations also shoot air through the plate’s hollow structure when they’re heated by light, allowing them to achieve lift.

In their latest study, published in the journal Science Advances, Bargatin, lead author Mohsen Azadi and their colleagues have demonstrated their most stable photophoretic levitation yet. It’s another step closer to using their flyers to probe the mesosphere, the region of Earth’s atmosphere at the edge of outer space.

The flyers in the team’s new paper have a different design than their nanocardboard ones, though they still take advantage of nanoscale features. These flyers are centimeter-wide discs that have a 500-nanometer-thin film of Mylar on top and a forest of carbon nanotubes pointing downward. The heat differential produced by shining bright light on the discs is enough to get air molecules to jet downward from the hotter underside, thrusting the disc into the air.

In a test chamber designed to simulate the low-pressure environment of the upper atmosphere, and using a light source designed to mimic the intensity of the sun, the researchers were able to achieve photophoretic levitation with unprecedented control.

Continue reading “Researchers Levitated a Small Tray Using Nothing but Light” at WIRED.