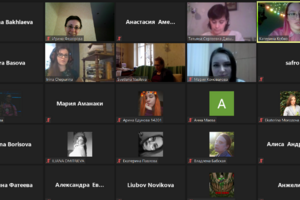 On November 27, at the Department of Germanic Philology and Scandinavian Studies of the Institute of Philology, an online meeting of the section “Actual problems of foreign philology” was held within the framework of the 72nd scientific student conference.
During the work of the section, 12 reports were heard on various topics of the linguistic (8 reports) and literary studies (4 reports), written under the guidance of the leading teachers of the department – professors, associate professors, senior teachers. The results of their research work last year were presented by third and fourth-year students, 1-year undergraduates and a 4-year student of the Department of Russian Language, Literature and Slavic Studies at the Athens National University. I. Kapodistrias.

All works differed in content and depth of analysis, interesting, independent observations and conclusions, clear structuredness and logic of construction, and the results were reflected in presentations. Most of the reports were written in a comparative vein and touched upon the comparison of English, Swedish, German and Russian, as well as intercultural translatology.

Prize places were distributed as follows:

Diploma of the 1st degree was received by Ekaterina Sergeevna Kobko (3rd year student of the profile “Swedish language and literature, English”) with a report “The concept of death” in the poem “Höst” by Stig Dagerman.

The II degree diploma was shared by:

1) Olshukova Elizaveta Ivanovna (3rd year student of the profile “English language and literature, German”) with a report “Features of the formation of phraseological units with a zoonym component in English and German”.
2) Bakhlaeva Marina Alekseevna (3rd year student of the profile “Swedish language and literature, English”), report “Creation of a character image through the lexical and syntactic features of the protagonist’s speech based on the story of Astrid Lindgren” Pippi Longstocking “.

The III degree diploma went to the following students:

1) Sukhotskaya Iolanta Vladimirovna (3rd year student of the profile “Swedish language and literature, English”) with the report “Comparative animalistic phraseological units in Russian and Swedish”
2) Kuznetsova Alexandra Andreevna (3rd year student of the profile “English language and literature, German “), the report” Features of the artistic realization of the synonymous series with the dominant ‘bad’ in the novel by J. D. Salinger ‘The Catcher in the Rye’ (“The Catcher in the Rye”) “.

The jury members especially noted several reports that are recommended for publication in a scientific journal:

“Opposition as a way of metaphorizing space in the poetry of Robert Frost (on the example of the collection ‘A Boy’s Will’)” by Ekaterina Dmitrievna Morozova, 1st year undergraduate student;
“The problem of duality in the novel by D. Setterfield” The Thirteenth Tale “” by Amelina Anastasia Eduardovna, 1st year undergraduate student;
Figurative meanings of somatisms in the Greek and Russian languages ​​”Amanaki Maria, 4th year student of the I. Kapodistrias National University of Athens (Greece);
“Features of the translation of a poetic text into English (based on the poems of A. Blok)” by Anna Vyacheslavovna Maeva, student. 3 courses of the profile “English language and literature, German”.
Participants and listeners shared their impressions of the conference:

It was interesting to listen to the speeches of the participants, because you could learn something new and useful from them. I especially remember three works: a study of animalistic phraseological units and zoonyms, as well as a report on Gothic motives. The first two reports are interesting because the expressions in question can be used in life, and it was surprising to note their similarities and differences in different languages. The latter interested me in a dark theme.

It was a valuable experience for all of us, both participants and listeners. The reports were interesting, familiarization with all of them flew by in one breath!

The conference was truly memorable! Each participant spoke brightly, with dignity, meaningfulness. We were also impressed by the topics of the reports themselves, which revealed the area of ​​interest of the participants. I am very grateful for the opportunity to take part in the event!

Thank you very much for the opportunity to participate in this conference and present your report. Also, thanks to the participants for interesting reports and for the questions that allow us to further reveal the topic under discussion.

I express my gratitude to the organizers of the conference. It was very pleasant both to speak and to listen to the reports of other participants. I wish you all continued success in your research activities!

I am glad that this year our section has reached the international level (performance of a student from Greece). I would like to express special gratitude to the presenter and head of the section Davydova Tatyana Sergeevna.

The department congratulates the winners and hopes for further scientific achievements of our students.

India Education Diary Bureau Admin Jan 19, 2022
Bhopal : Chief Minister Shri Shivraj Singh Chouhan has said that we all must work keeping the goal of a…