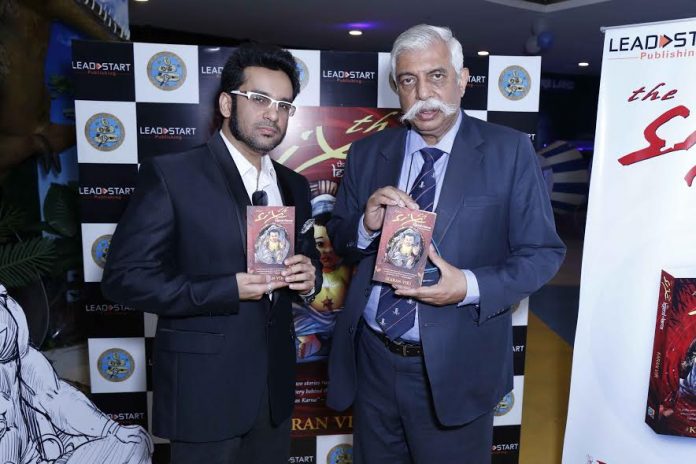 New Delhi: The legendary protagonist of the Mahabharata and a cult figure of Indian mythology takes on a completely new never seen before persona in Karan Vir Arora’s debut novel, The Sixth: The Legend of Karna. Major General Gagandeep Bakshi (SM, VSM), the highly decorated officer of Indian Army and the Author Mr. Karan Vir Arora unveiled the first book of the trilogy at an event in Gurgaon.

The Sixth — The legend of Karna is a masterpiece in storytelling by Karan Vir Arora. Deriving from his twelve years of extensive and passionate research Mr. Arora recreates the grandeur of a forgotten era and presents before us completely new and unexplored facets of Karna in his debut novel and the rumored bestseller.

The first novel of this trilogy takes us on a journey through the eyes of a property magnate based out of New York into two different parallel worlds torn by misfortune. After winning accolades for her service to sage Durvasa, long before the Mahabharata, a young Kunti receives a boon that is as powerful as immortality itself. Out of an encounter with a god is born the warrior that would change the face of humanity itself.

Mr. Gagandeep Bakshi stressed on the fact that we need respect and get inspired from our mythology which is an excellent source of wisdom, ethics, valor and duties. He also said that the contemporary times have a lot of similarities with the age of Mahabharata and we need to learn our lessons from Mahabharata if we are to defeat our enemies in a war. Karan Vir spoke at length about his passion for Indian Mythology and his fascination for the supreme warrior Karna, who defied the social customs and personal misfortunes to become the greatest archers of his age by sheer will and determination. Ignoring the taunts of being a ‘Sut Putra’ or the son of a charioteer Karna became the king of Anga and conquered kingdoms across India and Asia. He was a loyal friend to Duryodhana, the leader of the Kaurava Army and fought valiantly against his brothers Pandavas till his last breath when he was slayed unethically by his arch nemesis and younger brother Arjuna. Karan Vir also highlighted Karna’s virtues like sacrifice, courage, charity, valour, and selflessness.

There is no better person to tell the story of the legendary warrior than Mr. Karan Vir Arora the CEO of Vimanika Comics. Karan Vir has admitted to being a lifelong fan of Karna and a student of his ideals and principles. Karan Vir laid the foundation of Vimanika Comics with a vision to help the next generation rediscover the authentic and glorious Indian culture and mythology in a stylish and entertaining fashion. He has nurtured a team of award winning artists and writers at Vimanika Comics who have won several awards at comic conventions and Leadstart Publishers has published this book. Karan Vir is also a dedicated researcher and writer of ancient Indian history. Working with a team of archaeologists, researchers and scholars from renowned Indian & international research institutes, he endows his comics with historical and cultural authenticity.