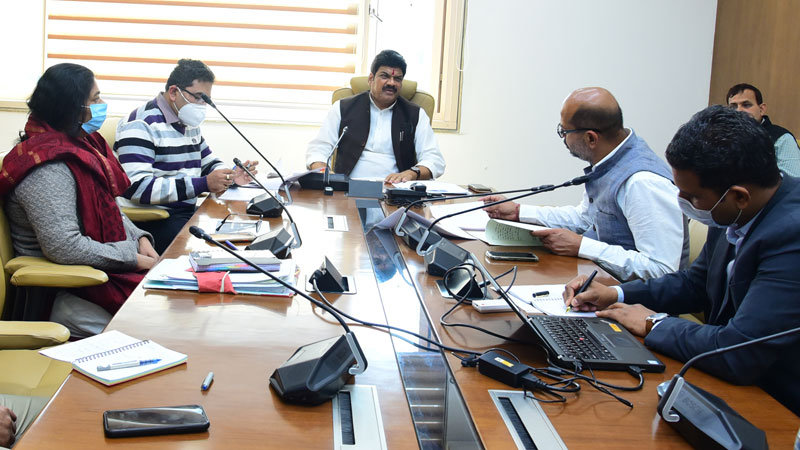 Bhopal : Revenue and Transport Minister Shri Govind Singh Rajput informed that pending dues amounting to Rs 97 crore will be paid to the workers of Vinod Mill located in Ujjain. Minister Shri Rajput was holding discussion with the authorities for action in this regard in relation to the decision taken by the Cabinet earlier. He informed that this amount of Rs 97 crore will be taken from the amount received from the auction of the mill land.

Minister Shri Rajput informed that as per the decision given by the High Court regarding the payment of the entitlements of the workers of Vinod Mill, the possession of 18.018 hectare land of the mill has been entrusted to the state government. In the first phase, 4 to 6 hectare land will be auctioned, in which the guideline price of the plot will be kept as reserve price. The layout of the land will be prepared by Ujjain Smart City Limited by getting the land converted for mixed use.

Revenue Minister Shri Rajput informed that the state government had received a proposal for allocation of land from the Ministry of Defence for the establishment of Sainik School in Malanpur in Bhind district for which there was requirement of 49 acres of free land.

About 20.952 hectares of land owned by the Department of Industrial Policy and Investment Promotion was transferred to the Revenue Department for Sainik School

He told that the expenditure on infrastructure for setting up the Sainik School will be spent by the Defense Research and Development Organization. An amount of about Rs 70 to 100 crores is estimated to be spent on this. The state government will bear the expenses to run the Sainik School, which is estimated to be around Rs 3 crore 50 lakhs annually.

After this, it was decided by the State Nazul Land Release Committee to allocate 100 percent premium of the market value as per rules and annual land rent at a rate twice the rate prescribed under the Reassessment Rules-2018. On the request of free allocation of land by the School Education Department, the proposal has been submitted to the Nazul Land Release Committee for consideration. Principal Secretary Revenue Shri Manish Rastogi, Additional Secretary Revenue Sushri G.V. Rashmi and other officials were present.

Bhopal should be the most beautiful city in the country and a centre of adventure tourism: CM Shivraj Singh Chouhan

Advantage of Union budget provisions should be taken in state’s interest: CM Chouhan