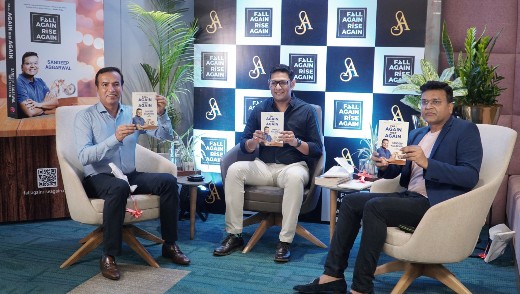 The virtual release of the autobiography took place on Saturday evening and attended by over 50,000 people from all walks of life. In an interesting panel moderated by co-author Sunny Sen who is co-Founder and CEO, TSB Media, the esteemed panelists shared their moments and thoughts about Sandeep Aggarwal. The panel comprised of eminent personalities like Sid Talwar – Renowned investor and Partner at Lightbox Ventures, Chaim Freidman – Entrepreneur turned investor and founding partner of LionBird, Viren Rana – serial entrepreneur and passionate investor and Vishesh Tandon – Dynamic Entrepreneur along with Sandeep.

On the launch of his Autobiography, Sandeep Aggarwal affirmed “The story of my life studded with stars and eclipses alike. It has been a humbling experience to recollect, relish and rewrite moments of my life that have shaped my journey to the present. I hope it can inspire a few courageous souls to think big, fight the odds, live through failures, and celebrate the victories. Fall Again Rise Again is the story of my life encapsulated in the bindings of a book and it gives me immense pleasure to share my story with the world on the completion of a decade of my Entrepreneurship journey”

Sid Talwar – Partner at Lightbox Ventures spoke about his long association “One thing about Sandeep, if you spend a lot of time with him, he loves to explain it and showcase to you exactly the steps that you’re going to take to be able to become successful in doing whatever it is that you’re doing.”

Chaim Freidman – Founding Partner, LionBird shed light on Sandeep’s inherent qualities “The impressions of him being super analytical, and a real straight shooter, I felt that if it’s good enough for him, it’s good enough for us. That’s how I and my brother decided to do back him in the first ShopClues and again in Droom.”

Vishesh Tandon – Dynamic Entrepreneur and Sandeep’s Childhood Friend said “Sandeep, the name for me, he’s a fighter. I’ve seen him fight all the time, you know, he just would not leave anything to faith. With being a fighter, he is a visionary and a risk-taker. He has an analytical mind and a sense of humour.”

Viren Rana – Serial Entrepreneur and Passionate Investor shared his thoughts about Sandeep “He is very aspirational and trustworthy. When Sandeep had the case, I knew it was just him at the wrong place and wrong time. I have 100 percent trust in Sandeep. A friend advised me against investing in Droom and yet I invested a certain amount of money. Later I went for lunch with Sandeep and by the end of lunch, I had doubled my investment. Three weeks later, I had tripled my investment just because of seeing his commitment and how he solves every problem fundamentally.”

Fall Again, Rise Again is an intimate and moving autobiography of one of India’s most successful start-up entrepreneurs. If ever there was anyone whose life could be described as nothing but a roller-coaster, it is that of Sandeep Aggarwal. ‘Fall Again, Rise Again’ are words that sum up the entire life of the founder of two billion-dollar companies—Droom and ShopClues.

Sandeep’’s story is of a middle-class boy who could not speak English for much of his school life but dreamt to make it big someday. A young professional who went to the US and could not get a job but eventually became one of the most sought-after Wall Street analysts.

He achieved more success than he could imagine but gave up everything to return to India to become an entrepreneur.

An entrepreneur who built one of India’s very few unicorns but was ousted from his own company. A dreamer who saw his dreams crushed by charges of insider trading in the US but rose like a phoenix to create yet another company. An accused whose agonizing wait for a final decision in his case continued for six long years but that did not stop a string of global investors from putting money into Droom, including Japan’s Toyota Group company. A man who finally ended up feeling vindicated when the US government dropped all criminal charges against him in February 2020 and the Securities and Exchange Commission settled all civil charges against him around the same time.

This is unlike any autobiography, especially among those written by people from the business world. Sandeep’s emotional strength and searing honesty will inspire and impact you in a way that is very, very rare.

Even during the worst possible time, that the world has ever seen, the book will put you on the path to learn the art of achieving success even after facing struggles and failures in life.

1. If you want to learn the art of entrepreneurship.

2. To realize that you need to keep moving regardless of success or failure.

3. To ask yourself: When is the right time to start your own venture?

4. To learn how to achieve success with Perseverance and Tenacity.

5. To learn how to deal with failures and chaos.

6. To accept the fact that life will keep jumping at you and keep saying, ‘Surprise!’

7. To learn how to get rid of struggles and let everything just happen.

8. To realize that results may be delayed but never denied.

9. To discover that the answer to all your troubles lies within you if you looking to step in the Startup Industry.

10. Life is nothing but a roller coaster: You Fall Again and Rise Again.

SANDEEP AGGARWAL is a serial tech entrepreneur, philanthropist and angel investor. He is the founder of two unicorn e-commerce marketplaces in India—Droom and ShopClues. Before turning entrepreneur in 2011, Sandeep worked as a top-ranked Wall Street analyst and did pioneering research and analysis on Internet and tech giants such as Google, Amazon, Microsoft, Netflix, Priceline, etc. He has spent the last 20 years in Internet and technology industries in the US and India.

Sandeep has been actively promoting start-ups and entrepreneurship and is among the topmost contributors to India’s digital revolution. He is an MBA from Washington University in St. Louis and also holds a US patent in the technological domain.

For more information about the book – https://fallagainriseagain.com/