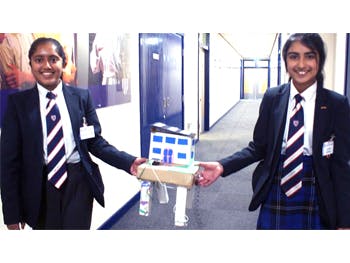 A Sandwell school is celebrating after being awarded top prize in a special competition to produce a prototype flood-proof home equipped with smart sensors.

Sandwell Academy was named top of the class in the challenge to design and build a flood proofing system for homes, which was set by academics at Birmingham City University to mark International Women in Engineering Day.

Secondary school students from across the region were invited to enter the competition with 408 students across six schools submitting entries.

Birmingham City University equipped schools with a BBC Micro:Bit – a programmable computer hardboard used in computer education – which were coded to work with water sensors to protect homes.

Students worked in teams to produce the systems would could be developed using an array of methods ranging from building floodwalls to creating a floating house.

Each teamed produced a video showcasing their work in producing the system, discussing their challenges and rationale, and demonstrating the effectiveness of the final product.

Lecturers and placement students from the University’s School of Engineering and the Built Environment, spent time examining entries and Sandwell Academy were named the winners.

Celebrating their win Amrit Gosal from Sandwell Academy said: “During the time of actually making our flood-proof house we initially had many ideas and doubts. We tried to be as creative and innovative as we could to get the most unique idea we could think of. I have never used a Micro:Bit before and I think the experience was quite fun and challenging. We personally enjoyed the competition and would love to do something like this again.”

Larissa Sandha who also worked on the winning project said: “I think the experience was very interesting and challenging, and we had a lot of fun designing our house. Coding the Micro:Bit was exciting as I have never used one before, and it was my first time coding. I had a great time and I would love to do something like this again”.

Laura Leyland, Acting Head of Department for Engineering and the Built Environment at Birmingham City University, worked alongside placement student Emily Tobin to devise and lead the challenge.

Laura Leyland said: “Engineering is about problem solving and giving students the opportunity to produce a real-world solution to a problem that faces parts of our region every year, is the perfect way to get them thinking.

“While this challenge was set on International Women in Engineering Day we really wanted it to be an inclusive activity that can help change perceptions and widen interest and understanding in what engineering is all about.

We were all extremely impressed with the work and application of the students at Sandwell Academy, and they were worthy winners of the challenge.
Laura Leyland

Birmingham City University is a supporter of promoting wider representation in the engineering profession including its membership of Women in Science and Engineering (WISE), which includes an annual scholarship to study at the institution.

It also holds regular events, competitions and support to help promote engineering to a wider audience.

Ben-Gurion University invites applications for M.Sc. in Geological and Environmental…