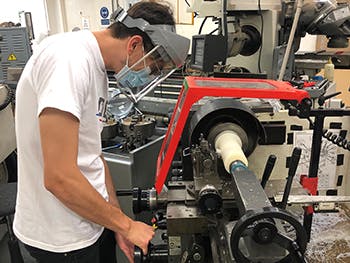 Students at Birmingham City University have designed and produced a prestigious accolade for the Jewellery Valuers Association.

The Jewellery Valuers Association (JVA) is the leading independent organisation in the UK and Ireland for professional valuers of jewellery, gemstones, watches and silver.

The trophy, created by the team at Birmingham City University’s School of Jewellery, will be awarded annually to a student valuer who has demonstrated outstanding potential or achievement.

“From our research on jewellery valuation we identified that probably the most commonly used piece of kit was the loupe,” explained student Alison Fowler.

“We decided to develop three concept designs which incorporated a moving lens – both to pay homage to the humble but essential piece of equipment, the valuer’s loupe, and to also allow details within the design to be viewed under magnification.

“The final design also strongly references the diamond which forms part of the JVA logo.”

As part of their research, student jewellers Alison Fowler, Conor Maher and Nicholas Brewer discovered that some of the oldest receipts for silver are written in Sumerian cuneiform and plan to include this detail within their trophy design too.

Heather McPherson, Fellow of the Jewellery Valuers Association, said: “I have always championed education within the world of jewellery valuing and therefore thought a fitting legacy would be to donate an award to be presented annually to a valuation student who has demonstrated outstanding potential or achievement.

“To further celebrate and encourage the next generation of all those entering our wonderful industry I decided that the best way to achieve my aim was to commission an original piece designed and made by students from the School of Jewellery at Birmingham City University.

My thanks go to Dauvit Alexander at the School of Jewellery who shared my vision for the project and found me three extremely talented and enthusiastic final year students to work on the project.

The trophy will be unveiled at the JVA Registered Valuer® conference, running from 10 – 12 September.