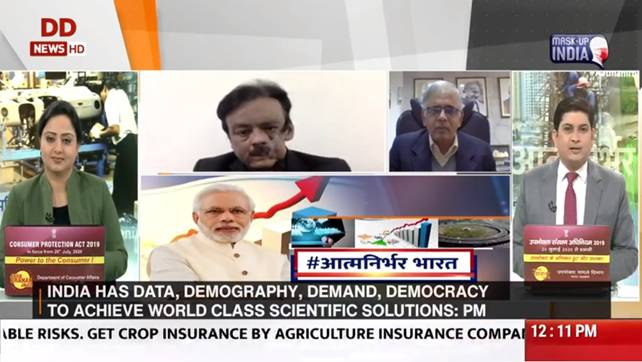 New Delhi: Science policymakers underscored the importance of attracting youth towards science and cultivating an innovative spirit from a very young age to develop scientific temper at a discussion on DD news.

“The biggest challenge is to attract youth into science from an early age for optimal use of India’s talent for the progress of the country,” Director General, CSIR Dr. Shekhar C Mande said while appearing on a DD News programme to discuss the role of science, technology and innovation and the way forward.

The discussion was organized after Prime Minister Narendra Modi’s address on using science, technology, and innovation for the progress and development of the country at the inauguration of the sixth edition of India International Science Festival (IISF 2020).

“We have a rich tradition of science and technology in the country. Our achievements in this field are unprecedented, and it has played a crucial role to take us to where we are today,” Dr. Mande said at the discussions.

He emphasised that event-based teaching and learning promoted in the New Education Policy would help attract young minds into science and technology and develop scientific temper. “We need to spread science and technology in local languages to attract a large number of people and provide the population in the villages with equal opportunities to participate in science, technology, and innovation,” he added.

“We do not lack talent, and COVID-19 is a big example of how we escalated efforts to start producing various medical equipment and even went on to export them. Scientists in the country have all the potential, talent, and skill to realise the Prime Minister’s dream of Aatmanirbhar Bharat,” Dr. Mande stressed.

Dr. Gupta hoped that the Science, Technology, and Innovation Policy (STIP 2020) would help retaining quality Ph.D. researchers in the country to work for the progress and development of the country. He also spoke about the need to convert brain drain to brain gain by utilizing the expertise of the diaspora and their eagerness to contribute to the country.

Dr. Gupta explained how science is being used as an enabling tool by people in villages and remote areas. “The ultimate goal is to make science people-centric and use it as a key driver for economic and human development,” he pointed out while citing an example under a new proposed scheme, where wifi would be made available to villages.

“We are at the third position in the world both in the field of scientific publications as well as in startups. We are producing 25,000 Ph.Ds in science and are not very far behind from the US and China. In college research, we were at 13th position in 2013, but today we are at 9th position,” he said.

Start-ups need to be encouraged so that people in India get an opportunity to show case their talent and boost the economy: Piyush Goyal