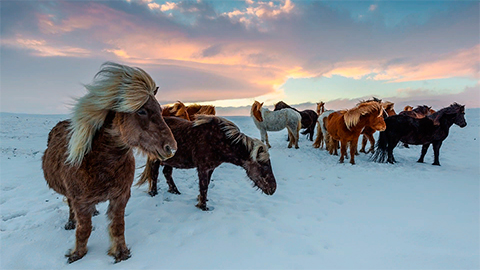 A group of scientists from Yakutsk, Krasnoyarsk and Irkutsk investigated the features of the plant diet of Yakutian horses. Using the example of animals from private farms, a significant role of fodder plants growing in Central Yakutia (smooth brome (Bromopsis inermis L.) and common oat (Avena sativa L.)) in the formation of an optimal balance of omega-3 and omega-6 polyunsaturated fatty acids in the liver, muscle and adipose tissues of horses was shown.

The main results of the study have been published in Biomolecules.

The Yakutian horse, distributed in the territory of the Republic of Sakha, was bred under the strong influence of natural selection. The animals are notable for their short stature, dense muscular build and long hair with thick undercoat. Such appearance features are fully consistent with the harsh northern conditions. The horse is kept unstabled most of the year and graze on vegetation that is under deep snow cover.

“During a short Yakutian summer cereals grow, reach maturity and give seeds. During this period local animals, including Yakutian horses, feed on them. In autumn, repeated vegetation begins and new shoots appear. It often occurs at low positive and small negative temperatures. Scientists from the Institute for Biological Problems of Cryolithozone of Siberian Branch of the Russian Academy of Sciences (SB RAS) and Siberian Institute of Plant Physiology and Biochemistry, SB RAS, proved that due to this hardening, cereals accumulate a significant amount of useful compounds, i.e. polyunsaturated fatty acids (in particular, alpha-linolenic acid). They, in turn, precede the synthesis of irreplaceable long chain omega-3 acids, without which animals and people cannot fully function. It was shown that these acids help plants to ensure fluidity of cell membranes, which is necessary to maintain the cell in a working state.

The muscle and fat tissue of horses, like many animals, reflect the fatty acid composition of the food eaten. Yakutian horses are no exception. Feeding on cereals enriched with alpha-linolenic acid, they accumulated it in their tissues. An interesting fact is that mainly linoleic and arachidonic acids were found in the horse liver. These are polyunsaturated fatty acids from the omega-6 family. Arachidonic acid is most likely synthesized in the tissues of horses, since food sources of this acid could not be found,” said Olesia Makhutova, study’s co-author, Doctor of Science (in Biology), assistant professor of the Chair of Water and Terrestrial Ecosystems, SibFU, senior fellow of the Institute of Biophysics, SB RAS.

The researcher noted that samples were taken from populations living in various regions of the Sakha Republic, including in the Oymyakon ulus, which is the coldest point in the Northern Hemisphere. It was the extreme temperature for all living things (up to –60 °C) that prompted scientists to think that the antifreeze qualities of fatty acids obtained from local cereals serve Yakutian horses well.

“We assume that the accumulation of alpha-linolenic acid in the body allows these animals to competently spend their stored fat. It is no coincidence that they look so well-fed. Without sufficient fat reserves and finely tuned mechanisms of its expenditure, horses cannot survive the Yakutian winters,” commented the scientist.

It is noted that today horse meat in Yakutia is considered to be the main source of animal protein and fat. The Yakutian cow, once widespread, has become small in numbers and needs to be restored, so the needs of the indigenous population for meat are provided by horses.

“The dietary value of the Yakutian horse meat is very high precisely due to the ideal balance of polyunsaturated omega-3 and omega-6 acids, 1:1 ratio of these acids is ideal for us, but civilization is steadily shifting the balance towards the predominance of omega-6 due to the dominance of vegetable oils, cheap pork and fast food in our daily diet. We also need omega-6 acids, but in combination with the omega-3 partners, which are found mainly in fatty fish. The horse meat we tested is also very good, especially for child nutrition and the diet of people suffering from cardiovascular diseases. If the population of Yakutia starts consuming mass-market products, which are now imported abundantly into the republic, and makes a choice in favor of, let us say, semi-finished pork products, this may drastically affect people’s health. This is just the case when you should not change a time-tested balanced die,” concluded Olesia Makhmutova.

Russia – USA in a dialogue of two cultures