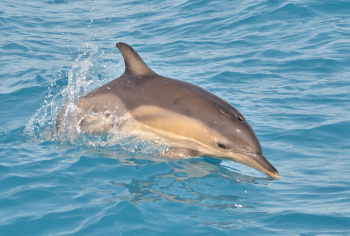 During an online lecture, scientists of the Marine Mammal Laboratory of the Shirshov Institute presented the results of the three-year-long research of Black Sea dolphins carried out with the support of Rosneft Oil Company.

Protection of the environment is an integral part of the Company’s corporate culture. Rosneft is working systematically to protect the environment, preserve and restore natural resources.

Support for the project to study and monitor marine mammals of the Black Sea is part of Rosneft’s large-scale environmental programme. In September 2018, the first sea expedition took place. Full-fledged studies of the dolphins’ habitat have not been conducted since the 1980s.

Two full-scale marine expeditions along the coast of Krasnodar Region, each about 1,000 km long, were conducted as part of the project. Apart from that, the automated photo record of the Black Sea cetaceans was used for the first time.

A large-scale aerial survey of the Black Sea cetaceans covering the north-eastern part of the Black Sea was carried out during the expeditions, along with coastal surveys and a wide range of laboratory studies.

Government of Canada Invests over $3.1 Million to Expand…

Free education in the Czech Republic with czech language…

The marine expeditions resulted in the construction of a schematic map of seasonal distribution of cetaceans. The most numerous species found throughout the waters was common dolphin. Bottlenose dolphins were commonly found in 12-mile area and Black Sea porpoises were registered everywhere but much less than other species.

The number of cetaceans in the research area reaches approximately 20,000 species, according to preliminary estimates. Those include over 12,000 common dolphins, approximately 4,000 bottlenose dolphins and a little over 1,500 Black Sea porpoises.

The qualitative and quantitative description of the sound signals, or whistles, of the Black Sea dolphins living in nature was made for the first time as a necessary basis for the future acoustic monitoring. The method of local acoustic accounting of bottlenose dolphins by individual “autograph whistles” recognition prints has been successfully applied.

The recommendations to prevent impacts on key habitats of the Black Sea cetaceans were developed based on the data obtained.

The lecture video record is to be placed in Black Sea Dolphins section of the Institute of Oceanology of the Russian Academy of Sciences and on social networks profile of the Institute.