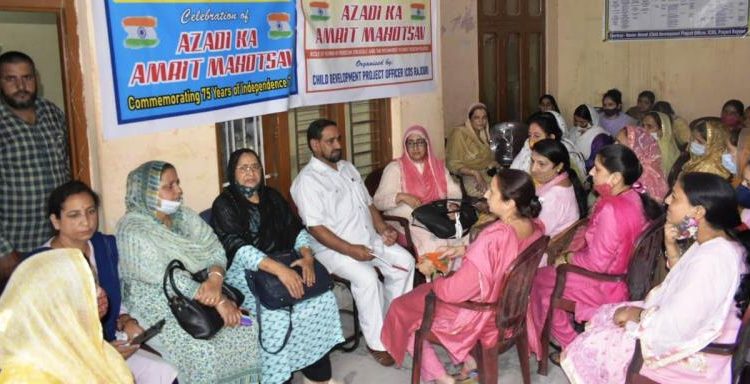 Seminar on women’s role in freedom struggle held in Rajouri

RAJOURI : Azadi Ka Amrit Mahotsav, which is an initiative of the Government of India to celebrate and commemorate 75 years of progressive India and the glorious history of her people, culture and achievements, is in full swing in the Rajouri district.

Series of activities are being organised in the district and as part of it a seminar on the women’s role in Freedom Struggle and their contribution in socio-economic reforms in India was today organized here in Child Development Project Office Rajouri.

The programme was jointly organised by the District Information Centre Rajouri, ICDS and Nehru Yuva Kendra.

The speakers highlighted the contribution made by the women in the freedom struggle and named several women achievers who struggled a lot to achieve the best in their lives.

They also said that the history of the Indian Freedom Struggle is incomplete without mentioning the contribution of women and the sacrifice made by them. They fought with true spirit and undaunted courage and faced various tortures, exploitations and hardships to earn us freedom, they said.

The participants were also made aware about several schemes and programmes launched by the Government for the socio-economic welfare of women. The National Anthem was also sung on the occasion.

Among the others, District Youth Officer, Nitin Hangloo; CDPO Rajouri, Naseer Ahmed; Supervisors, workers and other staff members of the ICDS Department attended the programme.