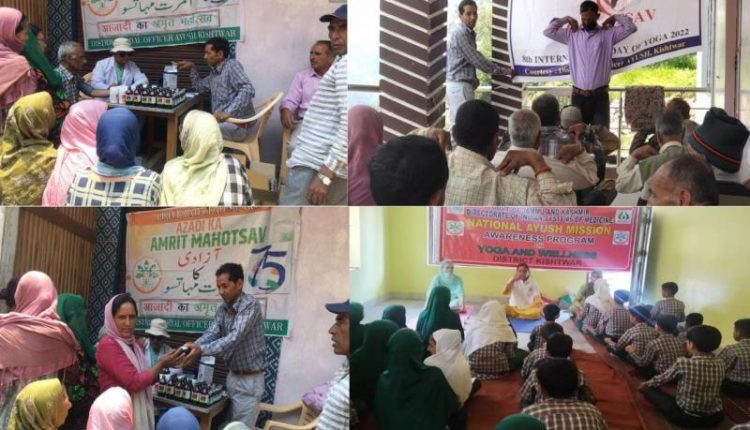 KISHTWAR : Department of Ayush Kishtwar, in collaboration with District Administration is organising a series of Iconic Yoga sessions ahead of the final event of 8th International Day for Yoga -2022 .

A major Yoga session was organised today at Sohal Paddar. Over 330 locals participated in the event wherein Dr. Tenzen Wangchuk Medical officer along with Ravail Singh, Senior Pharmacist demonstrated various yoga asanas and pranayamas to them.

The Ayush officers also enlightened them about the concept of adapting yoga-pranayama in their day-to-day life and its role in attaining healthy life.

Meanwhile, an immunity booster distribution camp was also organised whereat free medicines were given to the general public.

This is the fourth among 7 iconic Yoga sessions to be conducted by Department of AYUSH Kishtwar in collaboration with the government and private institutions, schools, colleges, armed forces, battalions etc before the final celebration of 8th International Day of Yoga-2022.

Another yoga session was organised by Dr. Pooja at Smart Academy Hullar where about 67 students along with school staff participated in the event.