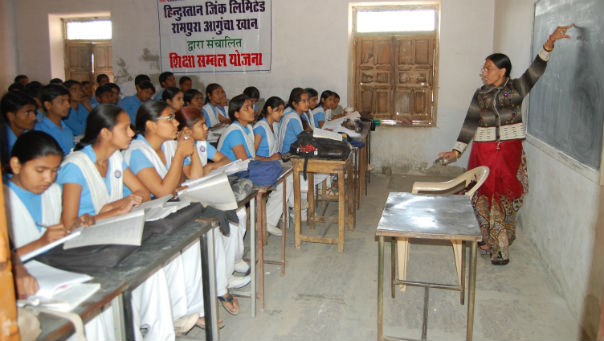 Udaipur: Shiksha Sambal Program since 2008 has been providing classes in Maths, Science & English in Government Schools . So far, over 50000 rural & tribal students have been benefitted…

When Geeta was born in a farmer’s house in Bhilwara in Rajasthan, unlike many of the rural families, the parents decided to provide her the best of education. Geeta also had an elder brother, Dheeraj, who was studying in nearby government school in 2nd standard. As the children were growing, the small girl also started showing interest in education. She would keep playing with his brother’s books and admire the pictures. When she became eligible for pre-school, she started going to nearby Anganwadi centre.

The parents were very happy since both the children were getting educated.

The problem started when Dheeraj reached class 10th and wanted to pursue Science. The school had no teacher to teach the subject. Not Just Science, even for Maths and English, teachers were not available. Dheeraj was disheartened. He had two options, either to change his subjects or search for a school outside the city. He was not ready to give up studies. As Dheeraj’s father was not financially sound, he could not afford sending Dheeraj to another city for schooling. Security and safety was another concern for the family.

Like Dheeraj, there were many students who wanted to study Science, Maths and English but they could not find a solution. Not just the boys, many girls of the village wanted to pursue studies further and choose these subjects.

Geeta, who was still young had the same fear. She was a brilliant student and wanted to pursue Engineering or Medical Science. But after knowing all this, her dreams were getting shattered. She started losing interest in education.

The matter went to elders of the village and they met the Principal of the school. But the Principal showed his inability and could only express regret.

Then the solution came from a Business House that was located near their village. One of their representatives met the school Principal. After hearing everything and meeting with the students, the Management of this Business House introduced them to a project for these students. This project would provide trained teachers to the students who would teach them English, Science and Maths subjects throughout the year and year after year which will get the recognition as part of school syllabus. The dreams of all these children were reinstated.

The Project was “Shiksha Sambal” and the Business House was Hindustan Zinc.

“For a tree to be strong and upright, its roots have to be firm”. Similarly, schools are a cornerstone in any student’s life to cultivate healthy thought processes
and groom intellectual abilities.

Schools in rural areas have their own challenges in terms of providing education to students. The government has provided schools in rural areas but the point is how well these schools are equipped to provide quality education. Students appearing for Senior Secondary education suffer the most. The teachers are not available for certain subjects and thus either they have to drop those subjects and choose the subjects available in the school or even change the stream of education to get qualified and experienced teachers. It is evenly difficult to convince villagers to send their children to schools, particularly the girls.

Government is very keen to provide the best possible facilities in village schools. But they do need the support of people, here, teachers, to run these schools successfully. This is when Corporates and Government should come together for the holistic development of communities by aiding the facilities and financial securities.

Shiksha Sambal provides a platform that empowers rural students to pursue their dream of obtaining higher education and joining prestigious institutions to play an important role in development/ progress of the country in future.

After the identification of the need of schools in terms of number of qualified teachers, Shiksha Sambal deputed qualified teachers from external sources in respective schools for the students appearing for Board Examination. These teachers are educated youths in nearby villages who were unemployed and struggling to get jobs, in spite of possessing a degree.

In 2016, Hindustan Zinc partnered with Vidya Bhawan Society, Udaipur, for effective implementation of this program.

Shiksha Sambal believes that conceptual clarity is the foundation of all learning and is essential for doing well in examinations. Such clarity will come through a well-rounded studying approach that includes comprehension, careful observation, classification, conducting experiments, peer group activities and an unending process of enquiry.

Languages of children have an important role in building conceptual clarity, learning other languages and cognitive growth. Performance in Mathematics will improve with the understanding of basic mathematical concepts. And the only way to really understand Science and score in it is by conducting experiments on their own. In each case, the programme pitches one point above the cognitive levels of children.

Regular orientation and subject-specific workshops are also being organized under Shiksha Sambal wherein it also focuses on conceptual mapping of each chapter of the given subjects and makes plans for systematic interventions with teachers and students. Preparing worksheets that could be used with children is an ongoing process; these materials help in understanding the concepts and in attempting examination questions successfully.

Another important component of Shiksha Sambal has been the Summer Learning Camps (SLCs). This year, 7 Summer Camps were organized in 5 districts of Rajasthan for more than 750 rural students who are appearing for 10th standard Board Examination this year. The first residential summer camp was organized last year in Udaipur that saw participation of around 70 rural students. Sighting the success of last year’s camp, this year, more than 200 students actively participated where about 50% of them were girls from villages around all 7 business locations including Pantnagar. Around 12-15 students from last year’s camp also participated this year as ‘Captains’ to aid in managing the current batch.

The company has also provided help in building infrastructure like science laboratories, well stocked library, playground, computer laboratory and also classrooms. There are many activities, such as solving worksheets, doing science experiments and using library books to deepen the conceptual understanding of the students.

Shiksha Sambal is reaching out to more than 57 schools in 5 districts of Rajasthan – Chittorgarh, Bhilwara, Rajsamand, Ajmer and Udaipur benefitting more than 6000 students wherein 150 teachers, 80 Field Instructors (FIs), 50 HZL employees-volunteers and resource persons from Vidya Bhawan Society are engaged in strengthening the quality of education.