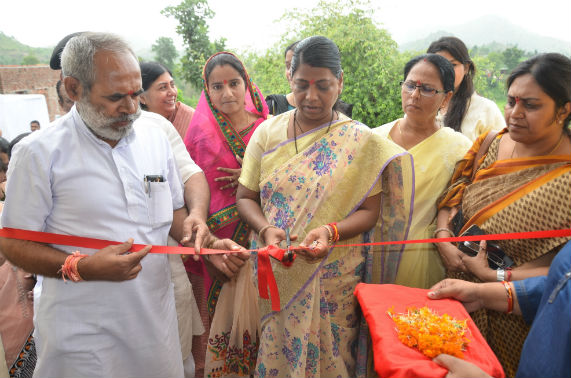 Udaipur : So far, more than 100 “Nand Ghars” have been constructed across three states and 2911 Anganwadi Centres have joined “Khushi” Project…

On 4th August, 2017, 2 more “Nand Ghars” – Dhawaditalai and Main Rawa were inaugurated in Rawa village of Girwa Block at Udaipur District by Chief Guest – Smt. Anita Bhadel – Hon’ble Minister of Women and Child Development, Government of Rajasthan and now 20 Nand Ghars have been constructed in Udaipur district with 100 more Nand Ghars in pipeline.

During the inaugural ceremony, Smt. Bhadel said “For the progress of the country, along with infrastructure development, it is important to focus on human development. Anganwadis strengthens the foundation of children below the age of seven years – their nutrition, health and education. Government and Vedanta Hindustan Zinc have come forward with well-equipped facilities for both mother and child including skill training for women in the form of ‘Nand Ghar’. Now communities have to take the responsibility of Nand Ghars to make it successful”.

To make the project more cohesive, “Nand Ghar” act as a focal area for immunisation, gender sensitisation and maternal care. It also aims to enhance the learning environment through an e-learning module and skill enhancement program for women where they will undergo entrepreneurship training, including skill enhancement, to start their own micro enterprise with credit linkages, thereby increasing their contribution towards the Indian economy.

During her visit to Udaipur, Smt. Bhadel also launched “Khushi” project in Chawand village wherein 318 Anganwadi Centres of Sarada Block have been included under the project as part of Phase-2.

During the launch program, Smt. Bhadel said “Through Khushi project, Anganwadi program will be strengthened to improve attendance, health and the well-being of Anganwadi children. Now communities have to come forward and support it by actively participating in it”.

In year 2015, Hindustan Zinc signed the MoU with Government of Rajasthan to strengthen 3055 Anganwadis of the ICDS Department in 5 districts i.e. Udaipur, Rajsamand, Chittorgarh, Bhilwara and Ajmer of Rajasthan under its flagship project “Khushi” in 2 phases.

University of Exeter: A. G. Leventis Foundation funds new Chair in Classics and…