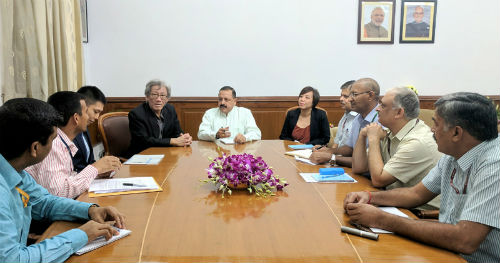 New Delhi: The Government of Singapore will set up a Skill Center at Guwahati which will cater to the entire North-Eastern region. This was stated here by Union Minister of State (Independent Charge) of the Ministry of Development of North Eastern Region (DoNER), MoS PMO, Personnel, Public Grievances & Pensions, Atomic Energy and Space, Dr Jitendra Singh after a meeting with a high-level delegation represented by the High Commissioner of Singapore, Mr Lim Thuan Kuan here yesterday. The Indian side led by Dr Jitendra Singh, consisted of senior officers from the Ministry of DoNER, Department of Space and Ministry of Personnel, Public Grievances & Pensions, which are the three main areas where Singapore has expressed its keenness to collaborate with India.

As far as Skill Centre at Guwahati, it was stated that an MoU has already been formalized between Singapore and the State Government of Assam. As a follow-up to this, a Skill Center is proposed to be set up at Guwahati by the year 2019 and the Ministry of DoNER will coordinate in this initiative.

The Singapore delegation also expressed its preference to engage with India in the area of Space Technology for collaboration in “peaceful uses of Outer Space”. To this, Dr Jitendra Singh said that the issue will be followed up in an appropriate manner.

The Singapore delegation also wanted to seek the experience and expertise of India’s Ministry of Personnel, Public Grievances & Pensions to bring about value addition in public administration and governance in Singapore. Dr Jitendra Singh shared with them that there already exists an arrangement between Lal Bahadur Shastri National Academy of Administration (LBSNAA) Mussoorie with Singapore, wherein a certain number of passing out Civil Services/IAS officers, accompanied by two faculty members, regularly undertake a visit to Singapore.

Dr Jitendra Singh said, India and Singapore have always been favourably inclined towards each other and referred to the recent visit of the Deputy Prime Minister of Singapore when a stimulating lecture by him was organized under the auspices of the NITI Aayog.