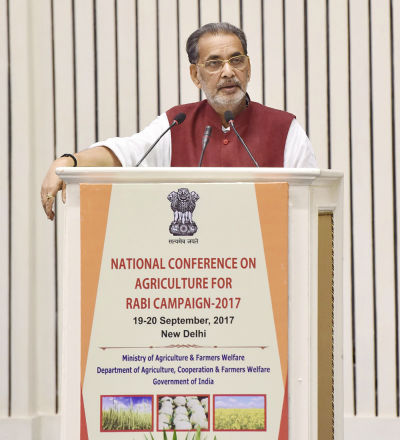 New Delhi: Union Agriculture and Farmers Welfare Minister, Shri Radha Mohan Singh said that considering its importance, the Government has accorded top priority to the agriculture sector and Finance Ministry announced Rs.62,376 crore fund allocation for the sector in 2017-18. The government’s aim is to increase the productivity and ensure farmers can get the remunerative price of their produce. The Government is also ensuring that along with special focus on dairy/animal husbandry/fishery, the agriculture education, research, and expansion system is further extended. Shri Radha Mohan Singh said that it is our responsibility to make special efforts to improve the agricultural sector so that it provides strong trade opportunities. Shri Singh said this today at the Two-Day Rabi Conference – 2017-18 organized at Vigyan Bhawan, New Delhi.

Shri Radha Mohan Singh said at the Rabi Conference, crop wise target is fixed and arrangement of supplies to different states is decided in consultation with the officials of various state governments. The use of recent technologies and new practices in the agriculture sector is also reviewed. At the conference, strategy for the upcoming Rabi season is discussed, ideas and experiences are exchanged and a roadmap is prepared.

RMIT: RMIT builds on its future as host of the 2022 World…

On the occasion, Union Agriculture Minister said that he has written to the State Governments to devise a strategy and focus on production to post-production activities while strategizing. Shri Singh said that to improve crop production, the Ministry has started the National Food Security Mission (NSFM), National Horticulture Mission (NHM), Rashtriya Krishi Vikas Yojana (RKVY), National Mission on Agricultural Extension and Technology and Direct Benefit Transfer (DBT).

Shri Radha Mohan Singh said that there is a special emphasis is to increase the production and productivity of oilseed crops. For this, the National Mission on Oilseeds and Oil Palm (NMOOP) has been started in 2014-15, which has three Mini Missions (MM) namely – MM on Oilseeds, MM on Oil Palm and MM on tree-borne oilseeds.

Production of wheat is also estimated at 98.38 million tonnes, a record. Wheat production in 2016-17 is 6.09 million tonnes more than 92.29 million tonnes during 2016. Union Agriculture Minister said that the government is also protecting the interests of farmers by announcing the minimum support price for major agricultural commodities.

RMIT: RMIT builds on its future as host of the 2022 World Building Congress

RMIT: RMIT builds on its future as host of the 2022 World Building Congress

iednewsdesk Jun 27, 2022
RMIT Melbourne is hosting the 22nd World Building Congress, confirming its status as a leading university in…

University of the Western Cape: Gardeners in South Africa may hesitate…