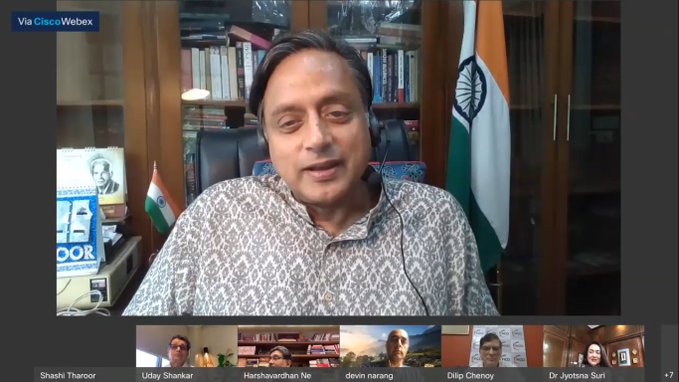 New Delhi: Dr Shashi Tharoor, Member of Parliament and Chair, Parliamentary Standing Committee on Information Technology today said, “A country’s soft power rests on three pillars – culture, political values and foreign policy. Soft power is the greatest asset for India in the 21st century. Soft power is not about conquering others but about being yourself and appealing to others.” Soft power needs to complement hard power as countries are being judged more and more by the soft power element projected onto the global consciousness, he added.

Addressing FICCI Forum of Parliamentarians webinar on ‘India’s Soft Power: Contours of Cultural Diplomacy’, Dr Tharoor said that the media and entertainment industry is an integral part of cultural diplomacy and is a valuable economic player. The industry has an extraordinary ability of job creation including for unskilled and semi-skilled workers. He added that the media and entertainment industry should work with the policy makers and progressive professionals to change people’s attitude and to encourage creativity.

Dr Tharoor said that India has come a long way in building its cultural diplomacy and it is important to recognize the value of liberating creativity. Speaking on OTT and new TV, Dr Tharoor said that there should be self-regulation. The need is to have an open mind and showcase India’s diversity to the world. The government should look at releasing more spectrum for the people. India enjoys pluralism, liberalism, free press and people can freely express their views. These are some of the elements which enhance cultural diplomacy of the country internationally, he added.

Mr Uday Shankar, Senior Vice President, FICCI said that we at FICCI were delighted to host Dr. Shashi Tharoor, Hon’ble Member of Parliament and Chairman of the Parliamentary Standing Committee on Information Technology, as part of FICCI’s Forum of Parliamentarians. We had a constructive and frank discussion on India’s diverse array of soft assets and how we could wield them to our advantage. We appreciate Dr. Tharoor’s insights and thank him for his offer to work with FICCI towards growing India’s soft power.

ASSOCHAM and BMR Legal Unveil report on “Equalisation Levy 2.0: India’s Digital Services Tax in the Making” calling for deferral of the levy