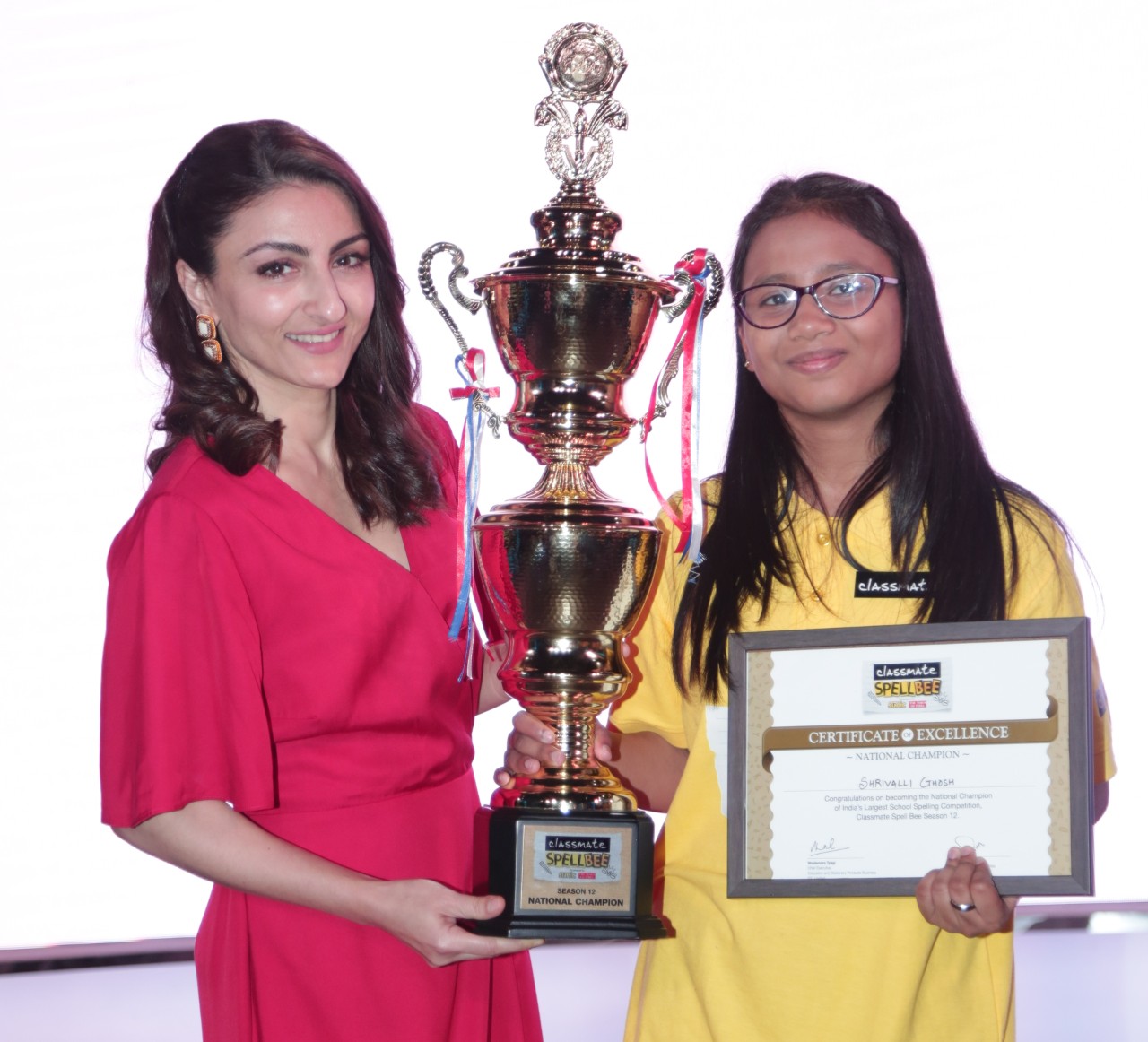 Mumbai: The Classmate Spell Bee Season 12, India’s largest spelling competition, an initiative by Radio Mirchi, culminated on 23rd June, Tuesday at a thrilling finale where the winners were announced and feted by none other than Bollywood star Soha Ali Khan!

Shrivalli Ghosh of St. Michael School, Siliguri was declared the National Champion while Bhadra Panicker of Delhi Public School, Indirapuram, Ghaziabad, was the first runner up.

The theme for the competition was ‘Be Better than Yourself’ which is in line with Classmate’s philosophy of encouraging children to excel in the field of their choice by striving to continuously improve by competing with themselves and not with others and to be better than themselves.

This year, the competition engaged with more than 3.5 lakh students across 1,000 schools in 30 cities. The competition was conducted in various phases comprising on-ground, online and a final televised phase. The top 15 spellers from each school competed for a place in the city finals and then further onto the national finals.

The top 16 students from across India battled it out in the televised National Finals, which was simulcast this year on Nick, Nick HD and Sonic. The National Champion of Classmate Spell Bee Season 12 won a grand prize of Rs 2,00,000, apart from an all-expenses-paid trip to witness the prestigious Scripps National Spelling Bee with a parent in Washington D.C., USA. The four semi-finalists won a cash prize of Rs 50,000 each.

“With each passing year, Spell Bee is connecting more integrally with students, parents, and teachers. Having started off as a spelling competition, it is today a landmark event that propagates the learning of the English language at the highest levels,” said Yatish Mehrishi, COO, Radio Mirchi.

“With this property, we aim to bring together some of the brightest children from across the country. What makes this competition truly special is the pride that participants take in being a part of this and making it what it has become today,” further said Yatish Mehrishi.

“Classmate has always endeavoured to recognize, nurture & celebrate the uniqueness of every child. Classmate Spell Bee Season 12 has taken Classmate’s brand thought of celebrating uniqueness further as it gave students yet another opportunity to identify and showcase their distinctive talents and skills on a nationwide platform” – Mr.Vikas Gupta, Education, Stationery Products Business (ESPB), ITC Ltd.

“Classmate Spell Bee season 12 has built on the scale we achieved last year with the aim of reaching out to even larger number of students across schools and cities in India, through a school contact program coupled with a dedicated website to engage students. The brand promises to support a child’s dreams with an equally unique & world class set of stationery products like notebooks, writing, drawing, art, and math instruments,” added Mr. Gupta

Season 12 saw Classmate Spell Bee actively engaged with the students through a dedicated website with a comprehensive set of learning modules, tests, interactive blogs and contests to help the students prepare for the event.

The grand prize for the winner of Classmate Spell Bee and those for the semi-finalists was specifically designed and sponsored by Classmate to help encourage and enable students to follow their hearts true calling.

The competition this year was presented by Classmate, co powered by Nickelodeon Sonic and The Times of India, and Victor Tango as the event partner for the property.