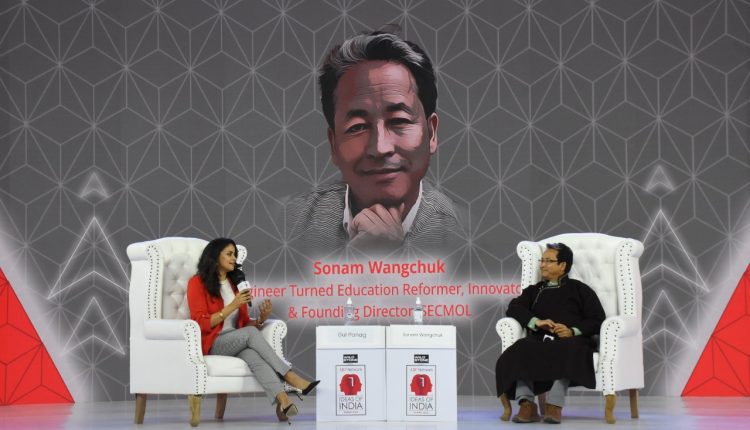 Sonam Wangchuk asks, “When Will We Be Free to Learn in Our Mother Tongue?”

Mumbai: Sonam Wangchuk, an engineer who has done great work in the field of education in Ladakh, is famous around the world. He is well known for his new inventions and ideas. Even the Bollywood hit film ‘Three Idiots’ was loosely based on his life where his character was played by Aamir Khan. Sonam Wangchuk attended ABP News’ Ideas of India Summit 2022 and answered all the interesting questions.
Sonam Wangchuk said, “I went to school at the age of nine, where I learned a lot of things. But the best schools are the ones where children are taught how to ask questions and ways of learning. The same thing happened in my school. If you have the urge inside you to learn something, no one can stop you. You can learn from every single thing. If you have strong command over your mother tongue then you can easily learn any language. I learned many languages in 6 months. I want to ask, when will we get this freedom?
Speaking about the impact of formal education on young, impressionable minds, he explained why sustainability is something that needs to be taught — “since we still have the mindset of colonial pasts and ideas of comfort which eventually benefit profit-making corporations and contribute to climate change”.

A formal education sustains this or rather suppresses the ability to question this by regimenting one into “boxes of thought”, he said. Coupled with the barriers of language and lack of relatability, “where a shivering child learns F for Fan in a classroom”, schooling systems need to rethink their ways, Wangchuk stressed. He remarked that schooling doesn’t ensure learning because “the best school is curiosity”, a learning software every child is blessed with.
During the summit, Sonam Wangchuk wore an outfit that was unique to her. He explained that this had a reason. He said that we should respect the clothing of every community. When we go to school, we learn to question. My question is why we are making Ladakh in Mumbai. There is a 30 degree centigrade temperature outside, but we are walking here at 18 degrees. We are adopting the atmosphere created by the British. He said that, we are in India, 26 degree temperature is the best here. Appealing to all the offices and hotels, he said that do not run the air condition below 26 centigrade temperature.
The Right to Education Act, 2009, also said that as far as possible, the medium of instruction in school should be the child’s mother tongue.
ABP Network is hosting its first ‘Ideas of India’ Summit, which will take place in Mumbai on March 25-26. The best minds from various fields will talk about India’s 75-year journey and the future it holds.

India can regain its erstwhile position of a ‘golden bird’: Kailash Satyarthi