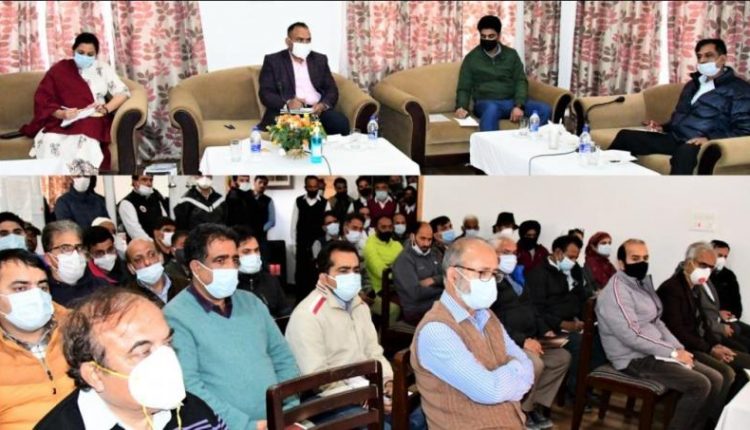 Sonamarg to be promoted as all season tourist destination: Div Com Kashmir

GANDERBAL : The Divisional Commissioner Kashmir, Pandurang K Pole today visited Sonamarg, where he chaired a high level meeting of officers to review the arrangements being put in place for keeping Sonamarg open during the winters.

At the outset, threadbare discussion was held regarding the necessary preparations and arrangements including water, electricity, health, road, fire service, snow clearing operation, traffic management, firewood and other related facilities to be put in place for keeping Sonamarg open during the winters.

Executive Director, NHIDCL (projects) briefed the Div Com about the traffic action plan through the Z-Morh tunnel and informed that the tunnel shall remain open for one-way traffic movement for light vehicles during winters.

The Div Com directed the BRO to ensure that sufficient machinery and manpower are deployed for clearing of snow from Gagangeer to Sonamarg including car parking areas and directed for submitting an action plan to the Div Com office by or before 25th October in this regard.

Regarding water supply, the Officers of Jal Shakti Department stated that water supply scheme is already under execution at the Thajiwas area under which water pipes are being laid underground and the water can be supplied to the establishment during the winters as well but the work on the project was stopped by the Forest department for which the Div Com directed the Forest department to issue clearance at an earliest so that work is started and get completed before the winters.

Regarding mobile connectivity, the officials of Jio, Airtel and BSNL service providers were directed to prepare an action plan to ensure all mobile towers in the area remain functional during winters.

Regarding electricity, Chief Engineer, KPDCL (Distribution) said that to provide electricity to the establishment at Sonamarg during the winters, underground cabling is required or electric lines are needed to be laid through tunnel tubes and a detailed proposal is formulated at higher level by the department.

The Div Com directed him to explore the possibility of providing electricity to Sonamarg during the forthcoming winter without interruption and keep gensets dumped at Sonamarg that can be used during emergency situations.

Similarly, Director Health Services Kashmir was asked to ensure all health facilities at PHC Sonamarg are kept available including sufficient medical and paramedical staff, medicine and ambulance service during the winters as well.

The Div Com said that the Government is committed to promote Sonamarg as all weather and preferred winter tourist destination, and in this regard all facilities and arrangements would be put in place by the end of this month and all departments are given necessary instructions in this regard.

He urged hoteliers/ shopkeepers to upgrade their infrastructure as per the weather conditions in the area so that the tourists visiting Sonamarg during winters are provided better facilities and shall not face any inconvenience.

He directed for finalizing holistic plan within this month regarding publicity and activities to be carried during winters like Snow festival, winter snow games and other activities as in other winter tourist destinations like Gulmarg and Pahalgam that can be available for tourists during winters so that same could be promoted through print, electronic and social media to have maximum tourist footfall here.

University of Exeter: New resource launched to help people live as well as…

iednewsdesk Nov 29, 2021
A wide range of advice, resources, and accounts of people’s own experiences are included in the Living with…

University of Exeter: Extent of migration of sooty terns presents…