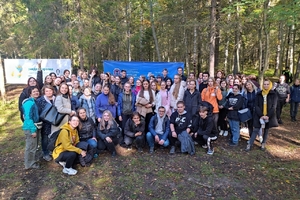 The charge of positive mood and unforgettable emotions was presented by a weekend hike.
According to the good old tradition, first-year students of the Institute of Foreign Languages ​​(IIL) went to the command post near the Lososinka River.

In a picturesque forest, the teams took part in the passage of the so-called stations, that is, tourist obstacle courses, for example, loops, a butterfly, a pendulum, a chessboard, etc. According to the organizers, the acquired skills in passing obstacles can be very useful in some life situations.

TCS Positioned as a Leader in IDC MarketScape for European…

A pleasant end to the event was a tea party by the fire. All participants received a charge of cheerfulness and good mood. The hike united the freshmen even more. Three hours in the fresh air flew by quickly.

Visit following the implementation of the NatureBeST project in Segezha

India Education Diary Bureau Admin May 29, 2022
What inspired members of the Brown University Class of 2020 to return to College Hill, put on a cap and…