Stanford has accelerated the timeline for considering requests to rename Jordan Hall and remove a statue above its entrance. 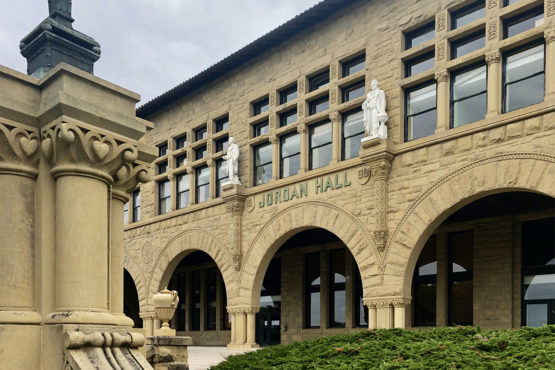 Jordan Hall is home to the Department of Psychology, whose faculty members voted unanimously to request the name change and removal of the statue. (Image credit: Kate Chesley)

President Marc Tessier-Lavigne has appointed a review committee and charged it with delivering recommendations before the beginning of fall quarter.

Stanford law Professor Bernadette Meyler will chair the committee, which will include faculty, staff, students and alumni.

In April, Stanford announced plans for a committee to consider requests from the faculty of the Department of Psychology, which is housed in Jordan Hall, and the student-led Stanford Eugenics History Project, to change the name. Jordan Hall is named for Stanford’s founding president, David Starr Jordan (1851-1931). The Psychology faculty also requested removal of the statue of Agassiz (1807-1873), who was Jordan’s mentor.

The requests for the building changes cite Jordan’s engagement in the American eugenics movement and the promotion of polygenism by Agassiz, who had no direct connection to the university.

At the time of the April announcement, much of Stanford’s activity had moved online due to the pandemic, and the university planned to convene the committee “when we have returned to campus in person.” But Tessier-Lavigne said he is moving up the timetable in recognition of Stanford’s commitment to racial justice and the fact that plans for a phased return to campus will prevent full in-person engagement.

“Since then, it has become clear that next academic year will include a mixture of in-person and online activity,” he said in emails to Psychology chair Anthony Wagner and history project founder Ben Maldonado. “The committee will, therefore, need to engage virtually whenever it convenes, removing the rationale for a delay. At the same time, the past month has seen a heightened sense of urgency to tackling issues of racial justice both in our country and on our campus.”

The committee will apply principles adopted in 2018 to evaluate requests for renaming campus features and will develop an approach for applying the principles to the request for the removal of the statue.

The committee plans to include one undergraduate and one graduate student. The university has asked the ASSU Nominating Commission for student nominations, with the final appointments to be made by the committee chair.

During this process, the university will place a sign in the building’s foyer indicating that the review is underway.

University of Strathclyde hosts female engineers of the future