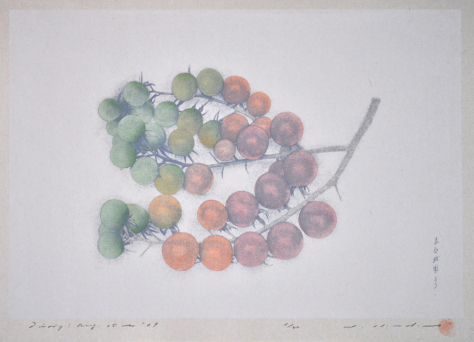 The University Museum and Art Gallery (UMAG), The University of Hong Kong (HKU), is honored to present Noda Tetsuya’s Diary of Contemporary Japanese Prints, an exhibition of autobiographic work by the celebrated Japanese artist. Noda first specialized in painting at the Tokyo University of the Arts before turning to printmaking. Influenced by his upbringing in post-war Japan, and the ideological, social, economic and artistic transformations of the era, Noda started to build a diary of prints in the 1960s recording his daily life, mastering the challenge of documenting the reality around him in both true and artistic fashion.

Technically, Noda combines photography, traditional Japanese woodblock printing, mimeograph duplication and silkscreen printing in a self-invented and meticulously modulated process of production and layering. Thematically, he regularly features his family and friends, self-portraits, landscapes, gifts and a series of plants that double as a documentation of his life. These techniques and themes have remained largely unchanged throughout his career. The result is a life-long chronicle of intricately poetic prints where the private and everyday are given heightened significance and universal resonance.

The exhibition investigates Noda’s artistic concept, approach and reception in the midst of the ever shifting and vibrant arena of printmaking and the broader Japanese art world, spanning the latter half of the 20th century to the present. The displayed works, all taken from the Steven Co Collection, illustrate how Noda’s innovations have carved the way for a reconsideration of the meanings of printmaking and art, beginning with his legendary victory at the Tokyo International Print Biennale in 1968. More importantly, they initiate a rethinking of the very identity of an artist. Often when trying to describe an artist, an image is conjured of an aloof figure, cocooned in his or her impenetrable mind and studio. We sometimes forget that artists are also flesh and blood, affected by families and relationships, who have similar hopes, joys, fears and anxieties fueled by our modern world.