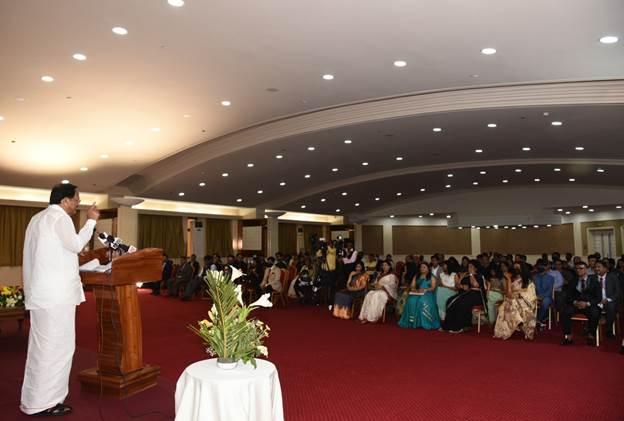 ‘Success of Indian diaspora around the world is a source of pride for us’: Vice President

The Vice President, Shri M. Venkaiah Naidu today emphasised the need for mutual respect among political opponents in democracy and termed debates, discussions and dialogues as the essence of the legislative process.

Shri Naidu, who is on a three nation tour to Gabon, Senegal and Qatar, made these remarks during the delegation level talks with the President (Speaker) of the National Assembly of Senegal, Mr. Moustapha Niasse in the capital city of Dakar today.

During the talks, he emphasised the need for all nations to work towards building peace. Terming peace as prerequisite for progress, Shri Naidu underscored that India advocates peaceful resolution to all issues in the world.

He said that India, the largest democracy in the world, and Senegal, one of the most stable and model democracies in Africa, are natural development partners and share a natural affinity with each other. He appreciated Senegal for conducting presidential, parliamentary and local elections very peacefully since its Independence, in a free, fair and transparent manner. “Just like India, democracy has been the bulwark of Senegal to guarantee political stability, economic growth, social cohesion and prominence in the international community,” he added.

Underlining the warm and friendly relations between the two countries, the Vice President reiterated India’s commitment to the socio-economic development of Senegal.

Expressing the need to have regular exchange of Parliamentarians to strengthen the cooperation and to share experiences, Shri Naidu invited the Speaker of National Assembly to visit India.

SPJIMR recognised as one of four management schools…

President of India along with the Prime Minister visits…

Earlier on June 2, the Vice President, Shri M. Venkaiah Naidu had met with the members of Indian community in Dakar during a reception organized in his honour.

Addressing the gathering, he said that there is a thriving Indian community in every African country, many of whom have been living there for generations. He said that through their achievements & contribution to Senegal’s development, the Indian diaspora has created immense goodwill for the country. “Indian diaspora has, indeed, been true cultural ambassadors of India. Their success around the world is a great source of pride for us”, he said.

During his visit to Senegal, the Vice President led delegation has signed several agreements with Senegal, a Visa Waiver Agreement for diplomatic and official passport holders, a Cultural Exchange Programme, and an MoU on cooperation in Youth matters.

Noting that there are several Indian-owned businesses in Senegal, Shri Naidu said that they can take the lead in creating new business and investment collaborations between Senegal and India and support mutual growth and development. “Much of what our two countries have achieved today, would not have been possible without the contribution of the vibrant Indian community in Senegal”, he said.

The Vice President also appreciated the Indian community which has kept the Indian culture and heritage alive and nurtured it in their own unique style. He expressed happiness that many Indian festivals are celebrated as a community and have always lent a helping hand to the locals in times of need through various CSR and philanthropic activities.

Shri Naidu recalled that the outreach to Indian diaspora has grown manifold in recent years under the maxim of 4Cs – Care, Connect, Celebrate and Contribute. “The safety, security, welfare and well-being of Indian citizens in all parts of the world is a priority for India”, he stressed.

President of India along with the Prime Minister visits Pathri Mata Mandir and Milan Kendra; pays tributes at the statue of Dr BR Ambedkar