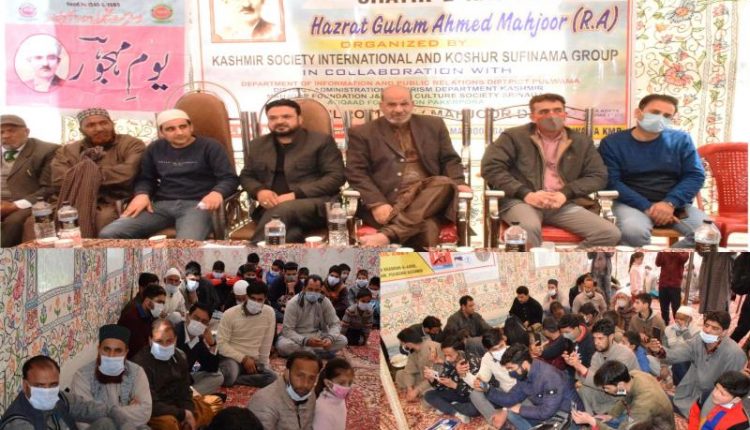 Additional Deputy Commissioner Altaf Ahmad Khan was the Chief Guest on the occasion.

Speaking on the occasion, the ADC highlighted the significance of Mehjoor’s notable works and his patriotic verses that touches every cord of our conscience even today.

He said the Shayir-I-Kashmir Peerzada Ghulam Ahmad Mehjoor was a revolutionary poet who introduced a new style into Kashmiri poetry and used the simple diction of traditional folk storytellers in his writing. He added that it is an honor to the district which has given birth to such a prominent poet.

Chairman Kashmir Society International highlighted the contribution of Mehjoor towards the literature and in popularising Kashmiri verses. He said Mehjoor was a prominent Sufi who showcased his Sufiyat and Tasawuf in a true spiritual way and worked to profess the ideology of love and peace among masses through his poetry.

He said by organising this conference in Mehjoors native Village conveys a strong message of tolerance and pluralism.

During the daylong function many cultural events were presented by the artists. A Mushaira was also held during which prominent poets presented their poetry in the honor of Shayar-i-Kashmir.

The Mehjoor’s songs were also presented and were warmly received and highly appreciated by the audience.

The event was attended by various writers, poets and a large number of people.