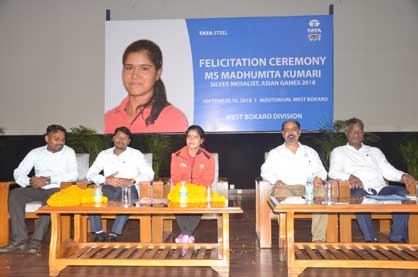 West Bokaro: A felicitation ceremony was organised by Tata Steel West Bokaro Division for Ms Madumita Kumari on Monday at Auditorium, West Bokaro on winning Silver medal in the compound Archery in ‘18th Asian Games’ held at Jakarta, Indonesia in August.
Mr Sahabji Kuchroo, Chief Operations, Tata Steel (West Bokaro) attended the event as chief guest along with Mr Mohan Mahto, President, Rastriya Colliery Mazdoor Sangh (RCMS) and Mr Prakash Ram, International Archery Coach, Mr Sishir Mahto, Archery Coach and Mr Bagicxha Singh, Arjuna Awardee and Senior Coach (Athletics), Tata Steel.
Ms Madhumita Kumari is the first Indian female to represent India in the ‘Compound Category’ of Archery. She not only represented India in the ‘18th Asian Games’ but also bagged Silver for the nation.
Ms Madhumita started her sports career in 2008, when she first attended the Feeder Centre run by Tata Steel. She was groomed here for two years after which she was facilitated to join Birsa Munda Archery Academy, Silli in the compound category for advanced training. Since then, she has not looked back. With more than 50 medals at national level in her kitty and Silver medal in Asian games, she is aiming for gold in Olympic games scheduled in 2020. She has also represented the country in 12 International events including Asian Grand Pix, Asia Cup, Youth World Championship and World Cup.
Speaking about her journey, Ms Madhumita said: “I am speechless to see so much love and affection. I am thankful to Tata Steel to provide a platform in form of feeder centre for players like me. Without this platform, I would not have been where I am now. I am happy to bag the silver in Asian Games but now I will practice harder and prepare myself to win gold in 2020 Olympics.”
Expressing his happiness on the success of Madhumita Kumari, Mr Kuchroo said: “I am delighted to see the success of Madhumita and wish her all the best for all her upcoming events especially 2020 Olympics. Dedication and hard work is essential for a success like this. At Tata Steel, we have always given priority to sports and considered sports as a way of life. The Feeder centre has groomed many national and international level players and we aim to produce many more.”
Speaking on the occasion, Mr Ram said: “I feel proud to see a daughter of West Bokaro setting a bench mark in international arena. I was once a coach at Tata steel Feeder Centre at west Bokaro. I got a lot of support during that time and we worked relentlessly towards development of archery in the area. Feeder Centre has given immense scope for students like Madhumita to come forward and join different sports. I thank Tata Steel for providing such a platform for the sports aspirants of West Bokaro and nearby villages.”

Madhumita’s father Mr Jitender Narayan Singh is an employee of Tata Steel and has been supporting her daughter with all means possible.
Like Madhumita, many youngsters groomed at the Feeder centre facility in West Bokaro have bagged top slots in various national-level events in the past years, bringing laurels to the State. One-of-its-kind in the district, this centre offers facilities and training to budding sportsmen and facilitates them to join other State and National level coaching centres like Sports Authority of India, Army Sports Institutes in Pune and Jabalpur and other such institutes of repute.
Among others present on the occasion were officials of Tata Steel, Union representatives, students from various schools and trainees of Feeder Centre.