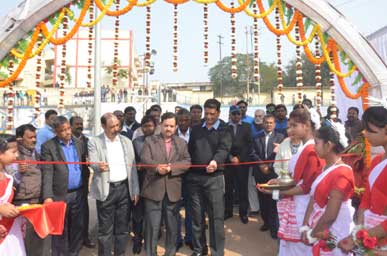 Various flowers and vegetables were displayed by the West Bokaro township residents, local samities, vendors and school children. A total of 42 stalls under institutional display and individual categories were put up. In line with this year`s theme “Art in Blooms”, many stalls were put up showcasing flowers, bonsai, vegetables, landscaping with potted plants and innovative landscape.
There is a separate arena for sale counters where rare species of plants and garden materials are available for display and sale for the people.
Appreciating the efforts of Tata Steel, Dr Vijay Shankar Dubey said: “At Jharkhand, this kind of event is only organized by Tata Steel in its various operational locations, be it Jamshedpur, Noamundi or West Bokaro. I am happy to see the involvement of students from various schools in this event and enthralled to see the innovation they have shown in their art and craft showcased in the event.”

Reiterating Tata Steel’s commitment towards environment, Mr Sanjay Kumar Singh said: “Tata Steel is committed towards protection of environment and biodiversity conservation. Annual Flower & Vegetable Show is a good platform to create awareness on the subject and involve the community at large. We intend to organize this event is a much bigger scale from next time and I request all for much more participation. This is a platform to create awareness regarding environment among the people residing in and around West Bokaro.”

The inauguration was followed by a cultural performance by the students of Tata DAV Public School, Ghatotand that kept the audience spellbound.