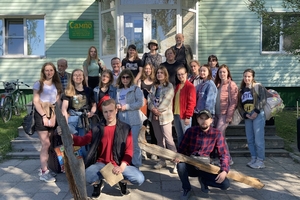 The Arctic expedition of the Humanitarian Park has been successfully completed

The complex scientific expedition “Kalevala-2021” has completed its work.
On the evening of June 12, the expeditionary team returned from the Kalevala region to Petrozavodsk in full force of 12 teachers and 15 students of PetrSU. The trip to the Arctic region of Karelia (Kalevalsky) was planned a year before the start, and therefore the preparation of a complex scientific expedition had several stages of work. The clear organization of all types of activities during the expedition allowed the participants to complete the research, educational, vocational guidance and practical programs in full.

The purpose of the expedition was to conduct a comprehensive study on the topic “Ways of preserving human capital in the Kalevala national region – the Arctic zone of Karelia” in the context of humanitarian methodology.

According to the goal, the research program of the expedition was rich and varied. So, associate professor of IIPSN Oleg Igorevich Kulagin worked at the Municipal Budgetary Institution (MBU) “Archive of the Kalevala District”. The work was carried out over two days, as a result of which information was obtained from 18 cases of 3 archive funds:

F. 6 Statistics Department of the Kalevala District (1982-1997)
F. 51 Kalevala District Committee for Nature Protection (1989-2000)
F. 8 District planning commission of the executive committee of the district council (1982-1993), department of the economy of the district administration (1994-2001)
Thus, archival material was collected in the following areas for writing research articles: 1) Study and comparison of the Soviet and post-Soviet experience in the development of socio-economic relations in the regional economy (based on the materials of the Kalevala region); 2) Problems of economic risks and threats in the Kalevala region.

Professor of the Institute of History, Political and Social Sciences Lilia Ivanovna Kabanova conducted research on the topic “The psycho-emotional state of residents of the Kalevala region”, and also organized master classes on art therapy with children and adult groups.

Associate Professor of the Institute of History, Political and Social Sciences Irina Aleksandrovna Chernyakova and chief specialist of the PetrSU Publishing House Oleg Vladimirovich Chernyakov implemented a practical project to digitize the Museum of rune singers, including master classes for students and employees of the Kalevalatalo ethnocultural center. In addition, Irina Aleksandrovna read a series of lectures on the history of villages in the Kalevala region based on historical documents for the inhabitants of the villages themselves.

Elena Nikolaevna Luzgina, a senior lecturer at the Institute of History, Political and Social Sciences, with student Valeria Chashkina managed to conduct a sociological study of the identity and life strategies of young people in all organizations of the Kalevala village, as well as speak to schoolchildren with career guidance conversations.

Ilya Motelevich Solomeshch, associate professor of the Institute of History, Political and Social Sciences, studied historical memory, regional and local identity of residents of the Karelian borderlands in the format of interviews with local residents, as well as in the course of educational work.

Associate Professor from the Institute of Economics and Law Ivan Petrovich Konev worked on the topic “Preservation and Development of Human Capital on the Example of the Arctic Region in Karelia” and lectured on the implementation of National Projects in the regions of Karelia.

Seven out of 10 consumers in India encountered tech support…

Associate professor from the Institute of Physical Culture, Sports and Tourism Vladimir Ivanovich Shevchenko and senior teacher Tatyana Sergeevna Dmitrieva studied the tourism potential of the Kalevala region, and also successfully supervised the practice of students of the Department of Tourism.

Associate professor from the Institute of Forestry, Mining and Construction Sciences Ratkova Elena Igorevna researched the problems of preserving wooden architecture in the Kalevala region and worked with students to prepare exhibits for the Museum class of wooden architecture (Museum of Science of PetrSU).

Professor from the Institute of History, Political and Social Sciences Irina Mikhailovna Suvorova investigated the value preferences of the residents of the Kalevala region and the level of self-education of the adult population in the region.

The members of the expedition worked not only in the regional center of Kalevala, but also in the villages of Yushkozero, Khaikol, Voknavolok and the village of Borovoy.

Undergraduate students studying in the direction “Restoration and adaptation of objects of wooden architecture” – Alexander Tikhonov, Anton Ryamyakov, Ksenia Efimova, examined objects of cultural heritage of the 17th-19th centuries on the territory of the district, and also took part in educational work and on June 9 at the ECC ” Kalevalatalo “held an hour-long lecture for schoolchildren on the topic” Wooden architecture “.

Over the entire period of the expedition, hundreds of questionnaires and questionnaires were received, all materials after desk processing will be presented in scientific articles of scientists and students, as well as at the annual scientific conference of the Humanitarian Park of PetrSU “Karelia through the eyes of scientists-2021: the main results of expeditionary activities”.

Assistance in organizing events was provided by the director of the Interdistrict Resource Center of PetrSU in Kostomuksha, Guseva Elena Yurievna.

The first graduation of designers from PetrSU

Seven out of 10 consumers in India encountered tech support scams in the past year:…

UNESCO and the Internet Society announce strategic partnership to advance…