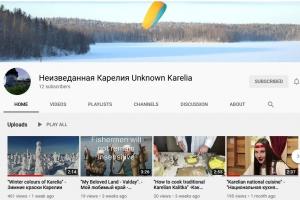 The winter stage of the competition of video projects for schoolchildren of the republic “Unknown Karelia” has ended. The organizers of the project are teachers of the Department of Foreign Languages ​​of Humanities at the Institute of Foreign Languages ​​of PetrSU.
The winners of the winter session of the projects were 5th grade pupils of the Pyaozero secondary school, Anna Semenova and Ekaterina Nikitina, who prepared a video on the theme “Winter Colors of Karelia” .

Schoolgirls told about a remote corner of Karelia – the village of Pyaozersky, which is located in Louhsky district, the northernmost district of our republic. Picturesque landscapes, eye-catching forest expanses, fabulous mystery of the Karelian nature will not leave spectators indifferent. The very young participants of the project were able to display the pristine beauty and grandeur of their native land in their video. The organizing committee of the competition would like to thank Olga Sergeevna Semenova, an English teacher at the Pyaozero secondary school, for preparing a team of students who took first place in the competition in the Information Video nomination. The next stage of the competition is the spring one, which will last until May 31.

PetrSU – co-founder of the journal “University Management: Practice and Analysis”