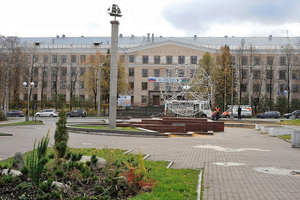 Now the whole world has plunged into the online format, our life has become closely connected with home and computer.
But is it really that bad? After all, now we have access to literally every corner of our world. We can visit theaters in Moscow, libraries in Berlin and museums in New York. Both students and teachers of Petrozavodsk State University got this opportunity.

On November 27 and 28, two online lectures were held as part of the series of theatrical lectures “Science, Literature, Theater: German Heritage of the 20th Century”: November 27 – “Blue Horses and Riders. On Expressionism in Literature and Fine Arts “, and on November 28 -” On the roundabout ways of literature. Gunther Grass in poetry and prose. ” The lecturers of the event were Yuliana Kaminskaya, Candidate of Philology, Associate Professor of St. Petersburg State University, and actors from the leading theaters of St. Petersburg. The event became part of the program of the Days of Germany in Petrozavodsk (Deutsche Tage in russischen Regionen).

Thus, more than 60 students and teachers of PetrSU began their Saturday day with a lecture on the life and work of the largest German writer of our time, Gunter Grass.

Juliana Kaminskaya’s story about the largest German writer G. Grasse was entertaining and highly expert. Associate professor at St. Petersburg State University not only deeply knows the work of the writer, but she herself met and talked with him when Gunther Grass came to St. Petersburg and gave a lecture at the university. And theatrical inserts from the actors of the leading theaters immersed listeners in the writer’s literary works. A special role in the lecture was given to the debut and most famous novel of the German writer “Tin Drum” (German: Die Blechtrommel).
The theatrical lecture was bright and creative. Literally every minute, the lecturer and the actors kept the audience in a state of tension and intrigue. The audience seems to be sitting in a lecture hall and following the life line of Grasse, as in a theatrical play.

University of Exeter: Learn Cornish in your own home as part of an exciting new…