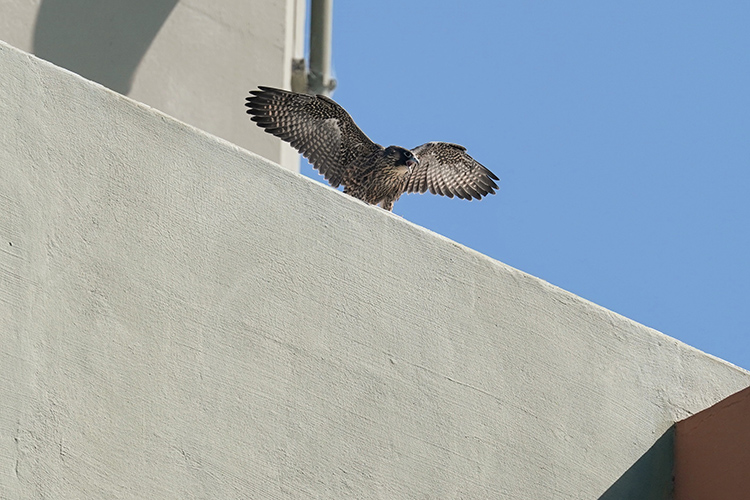 UC Berkeley’s three falcon siblings — Redwood, Sequoia and Poppy — have taken the big leap. They’ve flown off the campus’s 307-foot Campanile and are zestfully perfecting their flapping, soaring and landing moves near the tower where they hatched in April. And failing, tiring, resting and refueling as they go.

“Poppy was the last to fly because she’s bigger than her brothers, and it takes longer for female falcons to grow feathers long enough to support a bigger body,” said Mary Malec, a local volunteer raptor nest monitor. “Poppy’s already bigger than Annie (her mother).”

Peterson said the juvenile falcons are now fully grown, and that the only difference between them and their parents, Annie and Grinnell, is their brown feather coloring. “They will grow in their gray feathers after their second summer,” he said, “and look fully adult by fall 2021.”

This past weekend, said Malec, at least a few hundred people came to campus to watch the fledglings’ first flights. Malec and a handful of other trained volunteers typically work 10- to 12-hour days during so-called “Fledge Watch,” when young birds might need rescuing if they get stuck in trees, on the ground or atop nearby buildings on their forays from the Campanile.

Initially, four-time parents Annie and Grinnell accompany their young on their first few flights, said Peterson. “The behavior doesn’t last long, though, because the young falcons will quickly start chasing the parents, rather than the other way around!” he said.

Annie and Grinnell also have begun teaching their young to hunt, an activity that peregrines do almost exclusively in the air. They’ve started by attempting mid-air food exchanges, encouraging their offspring to grab food from them as they fly. “These are some of the most exciting flights we get to see,” said Peterson, “although they happen very fast.”

Poppy, Redwood and Sequoia, wherever they go, will continue getting food deliveries from their parents for the next month or so, during what Peterson called “flight school and hunting training.” He said he expects the siblings to start leaving the nest for good in mid-July.

“But that timing isn’t set in stone at all,” he added. “Some juveniles can stick around their parents’ territory for upward of two months. Lawrencium (a female, also known as Larry, born to Annie and Grinnell in 2018) stayed until mid-August.”

It’s easy for onlookers to get caught up in Fledge Watch drama. On Sunday, for example, Redwood flew off the Campanile, flapped along furiously, but impressively, in a wide circle, then returned to the tower, but couldn’t get a firm grasp on the Campanile. He then made another attempt, but failed to land a little lower. Next, he disappeared onto nearby Evans Hall — an attractive spot for the falcons because it’s tall, with a wide roof, but humans know it as the site of fledgling Lux’s death in 2017 and the rescue from a courtyard of juvenile Californium in 2018 — causing worry on the ground. Eventually, Redwood’s wings could be seen fluttering on the very top of the building, and falcon fans below exhaled.

All three siblings have been spotted hanging out on Evans, said Malec, and before Poppy’s first flight today, as she was running around a Campanile balcony, she was aware of where her brothers had gone and “was watching Evans the entire time. She was anxious to fly.”

Malec said that sibling falcons do hang out and “have been known to start their migration as a group, and stay together for a couple of months before they start to break off,” dispersing to their own territories.

This year’s new falcons at Berkeley have generated quite the following, and Cal Falcons — which frequently posts videos, falcon facts and updates on the birds’ activities — has received “hundreds of messages with one common thread — that the falcon family is a constant bright spot for people across the world,” said Peterson. The birds’ social media followers currently live in 45 countries.

Malec said the falcons are “helping people get through shelter-in-place (mandates), especially people with kids,” during the COVID-19 pandemic, and added that Cal Falcons’ fun and educational social media posts and the three 24/7 webcams on the Campanile also have upped the interest level.

“It’s been nice for people to see the next generation of peregrine falcons growing and thriving on campus,” said Peterson. “We hope that Annie, Grinnell, Poppy, Sequoia and Redwood are a sign of hope and stability for people this year and for many years to come.”