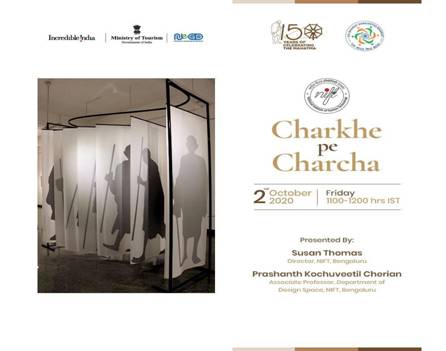 New Delhi: To mark the birth anniversary of Mahatma Gandhi, Ministry of Tourism organised a webinar on “Charkhe pe Charcha” under Dekho Apna Desh Webinar Series on 02nd October 2020. The Webinar titled “Charkhe pe Charcha” focused on spinning wheel and Khadi. Khadi, the moral fabric of the nation is a metaphor for swarajya and swavalamban. Nowhere in world history would you find the anti-colonial narrative spun around a fabric like in the case of India. From the boycott of foreign cloth to the promotion of handspun, handwoven khaddar, the spinning wheel or the charkha is a political and emotional symbol for India and this narrative is the gift of one man, Mahatma Gandhi, whose vision for a self-reliant village and spiritual cleansing were all tied to the yarn on the wheel. The webinar seeks to explore the dimensions of khadi in the freedom struggle of India and explores the journey of NIFT, Bengaluru in contemporising khadi and spreading the message of Bapu.

Presented by Ms. Susan Thomas, Director, NIFT, Bengaluru &Mr. Prashanth Kochuveetil Cherian,Associate Professor, Department of Design Space, NIFT, Bengaluru. The presentation started with Gandhijis attire of three piece suit when he was a lawyer in South Africa. When he returned to India in 1915, he started donning typical gujarati attire.Though Rabindranath Tagore hailed him as a Mahatma in 1915, it was Madurai which made Gandhi into a Mahatma, in the full sense of the term. For, it was here that he discarded the western clothing, and donned the khadi, which remained his signature look, till his death.

In 1918, Mahatma Gandhi started his movement for Khadi as relief programme for the poor masses living in India’s villages. Spinning and weaving was elevated to an ideology for self-reliance and self government. Every village shall plant and harvest its own raw-materials for yarn, every woman and man shall engage in spinning and every village shall weave whatever is needed for its own use. Gandhi saw it as the end of dependency on foreign materials and thus giving a first lesson or real independence. Raw materials at that time were entirely exported to England and then re-imported as costly finished cloth, depriving the local population of work and profits on it. It was for economic, cultural and social reasons and not merely political that Gandhi established the Khadi Movement.

On his second visit to Madurai on September 20, 1921, Gandhi stayed in the West Masi Street and when he saw the daily wage labourers going to work without a shirt he was deeply moved by their plight, he removed his attire and adorned the four metre Khadi dhoti on the night of September 21.

The next day, on, September 22, 1922, when he went to address the people at a place in Kamaraj Street, now called as Gandhi Pottal dressed only in his khadi veshti, people asked him the reason.The place where he stayed in 1921 is now a Khadi Kraft store, but a stone tablet in the building records the historic change of attire.

In 1934-35 he expanded the idea from helping the poor individual to self-reliance of whole villages. In 1942-43 he had sessions with workers groups and village organizers to re-organize the whole programme on a bigger country-wide scale. Thus Khadi became not mere a piece of cloth but a way of life.

Mr. Prashanth Kochuveetil Cherian started his presentation with the story of Khadi. The birth of khadi as a symbol of India’s freedom struggle took place at Sabarmati Ashram. One of the objects of the Ashram was that all inmates should wear hand-woven cloth made from Indian yarn. The question was how to make the hand-spun yarn. The spinning wheel was not available nor was there any person who could teach spinning. Gangaben Majumdar, whom Gandhiji met at the Broach Educational Conference and expressed the difficulty that the Ashram was facing, solved the problem. She found the spinning wheel for Gandhiji in Vijapur in Baroda State. Thus, the spinning wheel came to the Ashram and the production of khadi began. From then onwards Gandhiji wore only hand woven dhoti made of hand-spun yarn. Khadi became the ultimate definition of Swadeshi.

Mr. Prashanth highlighted the role played by NIFT in contemporizing Khadi and Strengthening the Karnataka State Khadi and Village Industries Board Brand through Integrated Product Mapping, Design Intervention, Product Diversification and Development, Training and Marketing Activities. The journey of Namma Khadi was an initiative to restore the pride and position of Brand Karnataka Khadi.

Dharwad is the only place in Karnataka where coloured cotton is grown. A panel of experts from NIFT Bengaluru have designed more than 400 products for the review and these were reviewed in the presence of Chairman, KSK&VIB and many artisans and the most viable products were selected for imparting training to the artisans.The feedback from the stakeholders of this business has been very encouraging. He further stated that with the co-operation and the partnership of KSK&VIB, NIFT would be able to position Brand Khadi effectively for the contemporary market not only in India but also at global level.

Summing up the webinar Rupinder Brar , Additional Director General said that we should not only be proud of our heritage and culture but also do our bit towards upliftment and encouragement of artisans by buying and wearing Khadi. It is important for us to live up to the value systems shown to us by Gandhiji and spread them far and wide. Dekho Apna Desh Webinar Series is an effort to showcase India’s rich diversity under Ek Bharat Shreshtha Bharat.