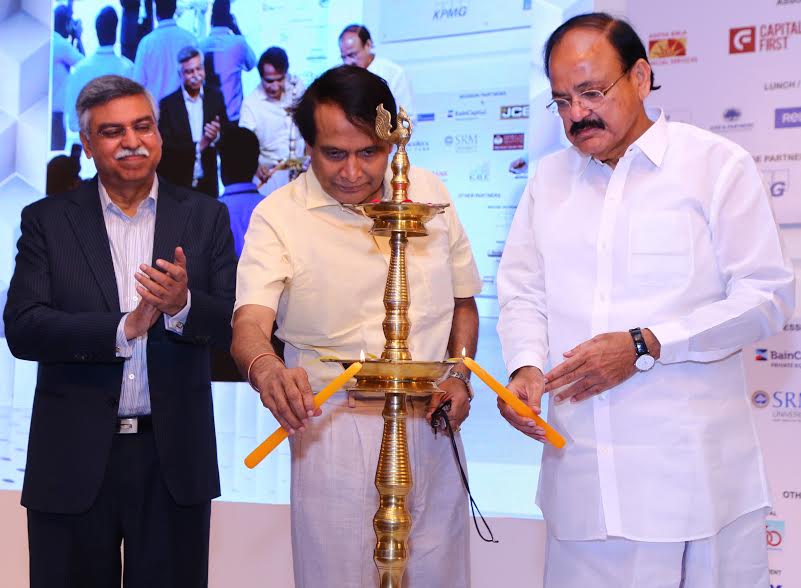 New Delhi: Mindmine Summit, one of India’s most influential ideas exchange platforms organized by the Mindmine Institute, an independent think tank set up by Hero Enterprise commences its 11th edition in the national capital today.

Senior Ministers in the Govt., Industry leaders and Opinion makers across various fields came together to exchange ideas and concepts on day one of the iconic 2-day Summit on this year’s theme of “Disruption – The New Normal for India?” The Summit was inaugurated by Shri Venkaiah Naidu, Hon’ble Minister of Urban Development, Housing and Urban Poverty Alleviation, in the presence of Guest of Honour, Shri Suresh Prabhu, Minister of Railways.

On the sidelines of the Summit, Mr. Sunil Kant Munjal announced an investment of INR 100 Crores into the Aavishkaar Bharat Fund floated by Aavishkar, a global pioneer in impact investing and a part of the Aavishkaar-Intellecap Group. The investment reflects Mr. Munjal’s commitment to address the key challenges faced by the country today in terms of employment, education & skills, environment, healthcare and financial inclusion.

Inaugurating the Summit Shri Venkaiah Naidu, Hon’ble Minister of Urban Development, Housing and Urban Poverty Alleviation said, “Addressing public grievances through the social media is one of our top priorities. In fact, our Hon’ble PM has the highest number of followers on Instagram, more than the US President. We live in an era of Disruption, which is also embedded in the policy making process of this Government. In fact, the word disruption best suits the way our Hon’ble PM, Shri Narendra Modi functions. While Demonetisation is a fight against corruption and ensuring digitalisation of financial transactions, GST is a revolutionary transformation implementing single tax system. The drive for digital payment channels and financial inclusion will ensure direct benefit transfers to Indians and will bring them into the formal financial system. 28 crore bank accounts have already been opened under the financial inclusion drive”.

Guest of Honour, Shri Suresh Prabhu, Hon’ble Minister of Railways: “Indian Railways has ambitious plans in the future. We are looking at an investment of $140 billion in infrastructure in the next 5 years. All meter gauge tracks will be converted to broad gauge. We are working towards a complete digitalisation of Indian Railways which will save billions of dollars. The Railways will spend about Rs 10,000 crore for renewal of tracks and adopt latest technology to detect rail fracture to reduce the accident rate to zero level.”

Some key observations made by eminent Ministers and distinguished speakers on day one include-
Smt. Nirmala Sitharaman, Hon’ble Minister of State (I/C) for Commerce & Industry, “The saturated economies across the world will need services trade from the emerging economies like India. The problem is that we do not have a Global framework for services trade. India is planning to firm up strategy for the next course of action across key issues at the multilateral body on a trade facilitation agreement (TFA) on services at the World Trade Organization (WTO).”

Hon’ble Minister Shri Jayant Sinha elaborated, “The Aviation Industry in India is a sunrise sector. We are working towards UDAN or ‘Ude Desh ka har Nagarik’, building efficient regional air connectivity, between the metros and the Tier 3 and 4 cities like Shimla, Gorakhpur Kanpur etc. PM, Shri Modi will launch UDAN on 27th April and we will add 33 new airports across the small Indian cities in one year. This will be achieved with a subsidy of only Rs. 205 crores.” He further elaborated on his mission of, “hawai chappal pehne walo ko hawai jahaj pe bithayenge” which is in lines with our PM’s vision of “Sab ka Saath, Sab Ka Vikaas.”

Speaking at the event Mr. Sunil Kant Munjal, Chairman, Hero Enterprise said, ” In a world of extreme economic despondency, India is doing better than rest of world. However this is not good enough for us. We have started making more than incremental changes since the 1990s. At MindMine we have tried to tracks these over last 10 summits, often keeping a little bit ahead of the curve. Today, there is a growing need to shake up the system, status quo is no longer acceptable. For India to evolve and meet the aspirations of all Indians, incremental change is not enough. We need radical measures. Fortunatly this has started happening.”

We are in the midst of a disruptive era or rather it has become a way of life for us, the new normal. The pace of change and the improvements that it’s leading to is such that it does not overwhelm either the visitors or even people going through it. It could well be said that disruption is much needed in India if we have to catch up with the world and aspire for a better life for millions of Indians.”

The Summit will culminate with the prestigious BML Munjal Awards for Business Excellence through Learning & Development. The two-day event will see more than 75 top influencers from across a wide spectrum, including corporate sector, government, bureaucracy, academia and civil society come together to discuss pertinent issues faced by the country today. In a run-up to the Summit, a curtain raiser ‘Mindmine Conversations’ on Creating “India Moments” on Disruption was attended by eminent industry names was held in Mumbai on March 31 ‘17.