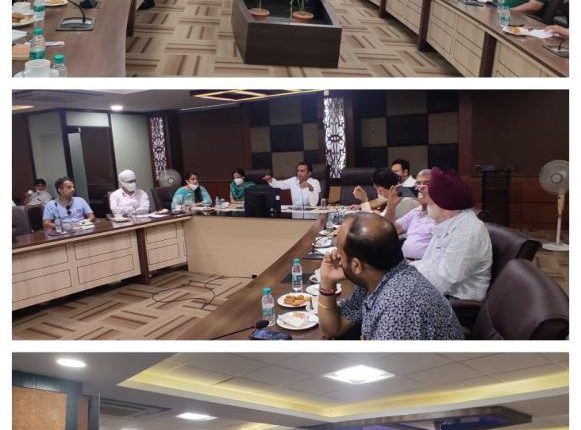 JAMMU : Directorate of Tourism, Jammu in collaboration with Department of Industries and Commerce, J&K Monday organized one day Workshop on New Industrial Policy of Jammu & Kashmir – 2021-30 and New Central Sector Scheme for Industrial Development of Union Territory of Jammu & Kashmir, here at Udyog Bhawan, wherein the stakeholders of Tourism Department were apprised about various Industrial Development schemes launched by the Government.

The New Industrial Policy 2021-30 was unveiled in April this year by the Government and has laid the much needed focus on different sectors including the key tourism sector for entrepreneurs.

Speaking on the occasion, Director Tourism Vivekanand Rai thanked Lt. Governor, Manoj Sinha, Principal Secretary to the Government, Industries and Commerce Department, Ranjan Parkash Thakur and Secretary Tourism, Sarmad Hafeez for providing benefits to tourism sector in Industrial Policy which will provide further impetus to the sector. While welcoming all the invitees, the Director Tourism highlighted the main objective of the scheme, with respect to the tourism sector and about various incentives available to the stakeholders.

Appreciating the participation of the stakeholders, Director Industries and Commerce Department, Jammu, Anoo Malhotra expressed hope that the outcome of the meeting would benefit the people associated with the tourism sector.

On the occasion, a PowerPoint presentation was made by Mohammad Arshad, Functional Manager, DI&C to tourism stakeholders wherein various features of the Industrial Policy with respect to the tourism sector were discussed in detail. Among other things, the industrial policy envisages a subsidy of 100 percent on purchase or installation of diesel gen-set; incentives on pollution control devices, besides subsidy on automation under the new central sector scheme.

Distt Admin Kulgam to hold series of tourism festivals at…