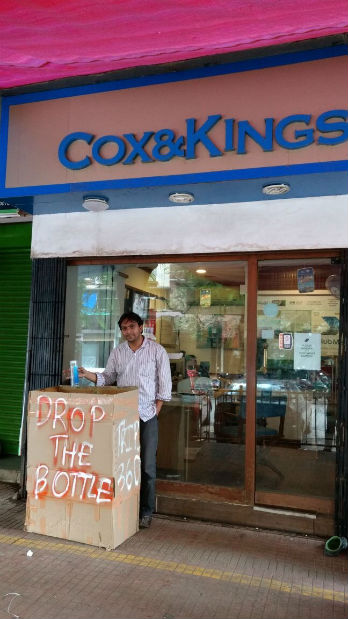 Mumbai: Plastic is indeed the most toxic problem in the modern world that is set to have far-reaching effects on us and our nature. To preserve the environment and create awareness among people, Trip 360˚, the adventure specialist of India has launched its second sustainability campaign called – Drop the Bottle with an ambitious target of collecting 10,000 plastic bottles across the Mumbai-Thane region. The campaign will run until 27th September through the different franchisees and stores of Cox & Kings at 12 locations which are designated as dropping centres.

The process of plastic penetration in our eco-system has accelerated at an alarming rate. The non-biodegradable product stays in the environment for more than 700 years. Our oceans are not spared either from plastic pollution that has witnessed irreversible damages to many endangered species. Instances of turtles eating plastic by mistaking it to be a jellyfish and seabirds consuming plastic considering it to be fish eggs are evidently on the rise. As per a recent study, billions of people worldwide are drinking water contaminated by micro-plastic.

To eliminate further plastic pollution that has also caused city floods, Trip 360˚ has been collecting plastic bottles from people through all its franchisees and stores in Mumbai-Thane region. The collected plastic bottles will be put to good use with the help of many NGOs. Besides the bottles being used for watering plants to make a barren land into a forest, the collection will also be used to convert plastic into poly fuel through an eco-friendly process. In its first phase, it is only the bottles being collected whereas it also plans to include other plastic product collection in the near future.

On announcing Drop the Bottle campaign, Rohan Prakash, Head, Trip 360˚ said,” It is not only the tourist hotspots and the newly discovered places that are witnessing growing plastic pollution but also our cities. Through different campaigns of Nurturing Nature, we wish to create awareness about preserving our locality as well as the pristine world for the future generation” He further added,” Every Trip 360˚ journey curated consciously integrates various sustainable practices”.

With an aim to make India as a global adventure destination, Trip 360˚ besides designing some of the most enthralling adventure itineraries, has been consciously carrying out its Sustainability programmes and reiterating its seriousness in the sphere of responsible tourism. All its sustainability campaigns are being worked upon under its umbrella initiative called ‘Nurturing Nature’ based on the 17 Sustainable Development Goals laid by the United Nations.