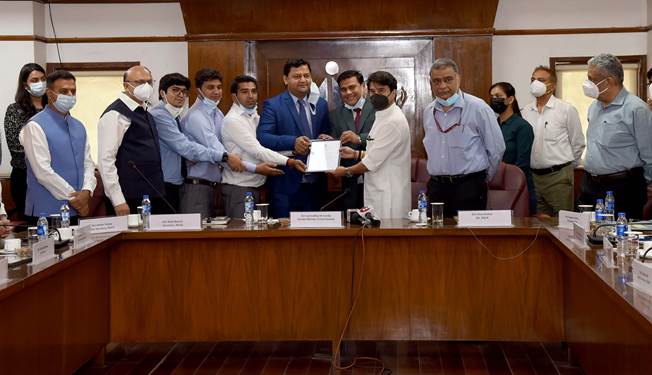 IoTech has received the Type Certificate in barely 34 days after submission of its online application on the DGCA’s DigitalSky Platform on 11 May 2022. This is despite the fact that the Drone Rules, 2021, allow 60 days to Quality Council of India (QCI) or the Certification Bodies (CB) and 15 days to DGCA for issuing the Type Certificate (i.e 75 days in total), provided all the necessary documents and test reports are as per specifications.

The Drone Rules, 2021 were notified on 25 Aug 2021 and the ‘Certification Scheme for Unmanned Aircraft Systems (CSUAS)’ for obtaining Type Certificate (TC) for drones was notified on 26 Jan 2022.

The drone certification scheme of January 2022 was developed by the Quality Council of India in consultation with drone startups, industry, academia and defence experts. The Government played the role of that of a facilitator and problem solver.

The drone certification scheme is likely to create an eco-system for world class drones to be manufactured in India and sold all across the world. There are 14 drone prototypes that are currently undergoing the certification tests. The number of Type Certified prototypes may exceed 100 over the next three years.

Flipkart signs MoU with Society for Elimination of Rural…

Speaking on this occasion, Shri Jyotiraditya M. Scindia congratulated IoTechWorld Avigation Pvt Ltd for the first Type Certificate (TC) under Drone Rules, 2021. He said that Ministry of Civil Aviation is working in the direction of Hon’ble Prime Minister’s vision “Minimum Government, Maximum Governance”. India has set a target to become a drone hub by 2030 and issuing of type certificate in record 34 days is a step in that direction. The other drone prototypes shall also be awarded certification soon, he added.

The Central Government has carried out a series of reform measures, as follows:
Liberalised Drone Rules, 2021 has been notified on 25th August 2021
Drone Airspace Map has been published on 24th September 2021, opening up nearly 90% of Indian airspace as a green zone for drone flying up to 400 feet
Production-Linked Incentive (PLI) scheme for drones has been notified on 30th September 2021
UAS Traffic Management (UTM) Policy Framework has been published on 24th October 2021
Monetary grant program for purchase of agricultural drones was announced by the Union Agriculture Ministry on 22nd January 2022.
All five application forms under Drone Rules, 2021 have been made online on the DigitalSky Platform on 26th January 2022
Drone certification scheme has been notified on 26th January 2022, making it easier to obtain type certificate by drone manufacturers.
Mission ‘Drone Shakti’ has been announced for supporting drone startups and promoting Drone-as-a-Service (DrAAS) as part of the Union Budget on 1st February 2022.
Drone import policy has been notified on 9th February 2022, banning import of foreign drones and freeing up import of drone components
Drone (Amendment) Rules, 2022 has been notified on 11th February 2022, abolishing the requirement of a drone pilot licence.
Applications from manufacturers for PLI scheme for drones and drone components were invited during 10-31 March 2022. The first provisional list of beneficiaries was released on 20th April 2022.

Drones offer tremendous benefits to almost all sectors of the economy. These include- agriculture, mining, infrastructure, surveillance, emergency response, transportation, geo-spatial mapping, defence, and law enforcement to name a few.

Drones can be significant creators of employment and economic growth due to their reach, versatility, and ease of use, especially in India’s remote and inaccessible areas.

Given its traditional strengths in innovation, information technology, frugal engineering; supportive policies, monetary incentives and a huge domestic demand base, India has the potential of becoming a global drone hub by 2030.

Ural Federal University: University Told How Not to Make the Wrong Decision in Choosing an Educational Program