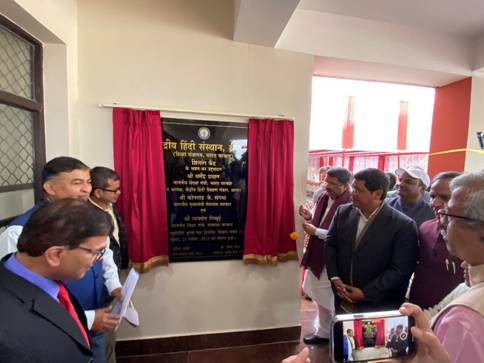 New Delhi: Union Minister for Education and Skill Development Shri Dharmendra Pradhan inaugurated the newly constructed building of Kendriya Hindi Sansthan at Mawdiangdiang, East Khasi Hills today. Chief Minister of Meghalaya Shri Conrad K Sangma was also present during the inauguration programme. Union Ministerexpressed his gratefulness to the Government of Meghalaya for providing the necessary assistance including the required land for setting up of this Institute at Mawdiangdiang, Meghalaya. He expressed that this Institute will work for the benefit of teachers of Hindi and people eager to learn and do research in the language and will cater to states of Meghalaya, Tripura and Mizoram.

Speaking on the occasion the Union Minister said that NEP 2020 is a visionary approach to transform the education landscape of the country and to achieve the realistic goal and to percolate its ripple effect to the grassroots. One of most important salient features of NEP, the Minister said, is that NEP-2020 emphasised on imparting education in Mother language at the primary level and the government is striving to achieve the target within the stipulated time frame.

Acknowledging the diversity of culture, language and tradition of this country and the co-existence amid this diversity, the Minister said that it because of this beauty of this language that people can share each others tradition and rich heritage. The Minister said that technology should be used extensively to preserve and enrich native languages so that people can use internet in their native languages and make people from other parts of the world about their rich culture and tradition.These practices will encourage innovation and creativity among the youths and may show light to world about many relevant issues concerning the people, the Minister added.

The Minister while acknowledging the rich culture of this region said, “There are many things to learn from this region, it has a very rich heritage and is strong in natural resources. There has been many good educational institutions coming up in this region including IIM’s new campus.” The Minister said that there is a lot to do for the youths of the region and exhorted everyone to work for providing a better environment for the young generation. He said, “I have been informed that Meghalaya has around the 3.5 lakh college going students and it is the collective responsibility everyone to build a conducive environment to ensure their quality education, skilling, raising their employability capability and imbibing inside them the value of fundamental research. The first step towards this effort would be to simplify the process of learning languages”.

The minister also referred to the North-East Education Conclave that was held in Guwahati on Saturday and said that the North East Region has nearly 180 languages and dialects spoken by various tribes and community and it is the mandate of the NEP to develop and preserve this heritage. In the days to come Kendriya Hindi Sansthan and English and Foreign Languages University (EFLU) will function as a Centre of Excellence and will work with the Government of Meghalaya to preserve and enrich Khasi, Garo and Jaintia languages with the help of technology, the Minister added. The Minister was categorical when he said that language is a tool that connect people from across the world and the availability of applications in the internet to learn languages of this region will enable people from outside the state to know about the rich culture and heritage of this region.

The Chief Minister of Meghalaya Shri Conrad K Sangma expressed his happiness for the inauguration of the Kendriya Hindi Sansthan in his state and said that the presence of this institute will help the youths of Meghalaya and the entire Northeast region to learn Hindi and also to excel in this language.