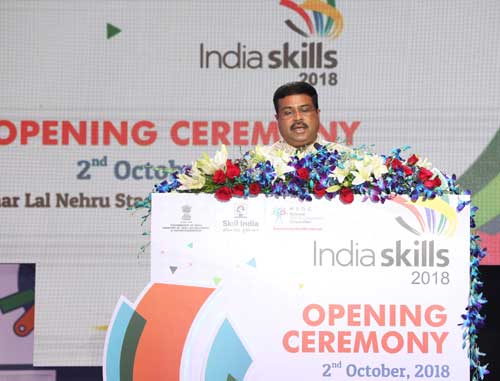 New Delhi: Shri Dharmendra Pradhan, Minister of Petroleum & Natural Gas and Skill Development & Entrepreneurship, Government of India, inaugurated the India Skills Nationals 2018 Competition. The competition will witness over 400 participants from across 27 states and union territories showcasing their talent and competing in 46 skills, 10 traditional skills and 4 demo skills.The Competition will also for the first time, see Abilympics – the ‘Olympics of Abilities’ for Divyangs. Over 50 participants will compete across 10 skill competitions in Abilympics. Winners of IndiaSkills 2018 will be felicitated at the closing ceremony on October 6th and will undergo best-in-class industry training for the WorldSkills International Competition in Kazan, Russia in August 2019.

Shri Dharmendra Pradhan, Honorable Minister for Petroleum & Natural Gas and Skill Development & Entrepreneurship, speaking at the opening ceremony, congratulated and welcomed the participants of India Skills 2018 who have made their mark at the regionals level and reached the national stage. He said that It is Honorable Prime Minister Shri Narendra Modi’s vision to make India, the Skill Capital of the world and the India Skills Competition is another initiative towards realizing this vision. He expressed happiness that over 50 Divyangs are also going to participate in India Skills.

University of Mannheim: Sustainability is becoming more and…

University of Göttingen: The livelihood…

He further added that the perception of skill is changing, making it more aspirational. He said that the landscape of skills is undergoing transformation and we are seeing more new age skills getting added. Mentioning that Innovation and technology are going to play a major role in shaping the ‘future of jobs’ he said that Skill India has taken several initiatives to train our youth in emerging areas.

Apart from skill competitions, the event will also host several engaging initiatives such as career counselling, skill exhibition, try a skill among others for the youth. Several other events such as State Ministers Conference, Skill Conclave, Industry Round Table will also be organized on the sidelines of the IndiaSkills Competition.

University of Mannheim: Sustainability is becoming more and more important for German…

University of Göttingen: The livelihood “quandairy” of milk producers in…

University of Göttingen: Deciphering the behavioral and neurobiological basis of…