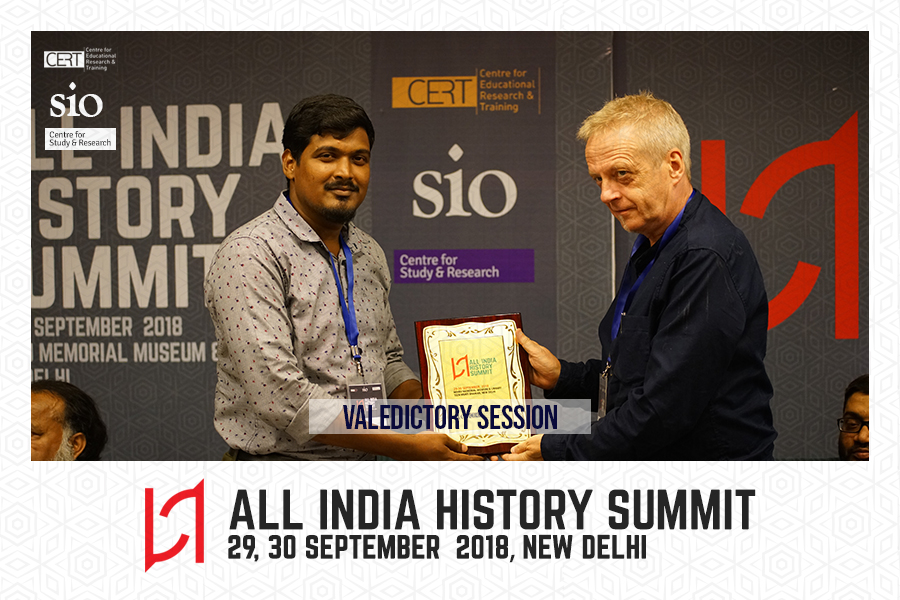 New Delhi: First day of All India History Summit which features experts, historians, professors and researchers from across India saw divergent views on one platform. The Summit was organised by Centre for Educational Research and Training (CERT) in collaboration with Centre for Study and Research (CSR) Hyderabad and Student Islamic Organisation of India (SIO) and was aimed to contemplate at historical perspectives and issues plaguing the marginalised communities.

The All India History Summit was a two days event on 29th and 30th of September 2018 held at Nehru Memorial Museum and Library, Teen Murti Marg, New Delhi. The first day of the Summit saw speakers representing a diverse cross-section of perspectives which would lead to an informed and incisive discussion on issues central to India’s way forward in the 21st century.

In his opening address, Nahas Mala – the President of SIO while highlighting the theme of the summit said “The political assertions around marginalized identities are detested in the arena of mainstream historiography by labelling it as identity communal politics, while using the existing binaries of secular, communal, liberal, conservative, humanist and casteist. Revisiting and Searching for an alternative methodology of historiography beyond these binaries is indeed a challenging endeavour for academia in order to resist Hinduvta’s rewriting of history”.

This mythologizing of Indian History was further explored by Prof KanchaIlaiah who spoke on the topic ‘Casting out Caste – Dalit Engagement with Power Politics’. He asserted that Caste is a reality and it needs to be addressed by Muslim community and stressed on Muslim scholars and students to revisit and rewrite the historiography of Dalit and caste system if they want to counter the Hindutva version of history and nationalism for Al Beruni was the only Muslim Scholar to shed light on this aspect of Indian history.

In the same way, Prof. Najaf Haider of Centre for Historical Studies, Jawaharlal Nehru University while addressing the audience stated that contrary to the egalitarian and equalitarian principles of Islam emphasised, Muslims in India are hierarchically divided into various groups. Speaking on the topic ‘Economic History of Mughal India’ Prof Najaf said, “The Indian economy was better at the time of Mughals than British. Mughals never transferred economy to other countries like Britishers.

While rebutting the Hinduvata version of Mughal History, another Panelist, Prof. Istiaq Ahmed Zilli spoke about locating Islam in Indian History. He reiterated that the Muslim rule in India was not an Islamic state but just a Muslim state because they were not following the Shariah and Muslim society was hierarchical in nature.

The first day of the All India History Summit was attended by Delegates from 12 states and from more than 30 Universities and educational institutions. 10 research papers were presented on Day One which was chaired by Prof. Syed Ayub Ali of Kakatiya University.

The second day of the Summit was attended by well-known academicians from various universities such as Prof. Syyed Zaheer Husssain Jafri from Delhi University, M.T. Ansari from HCU and Khan Yasir from Delhi University etc. Prof. Zaheer Hussain presented his paper on “Education and transformation of knowledge under the Muslim Rulers in India.”M.T Ansari presented his paper entitled “Muslim political Assertions: Thinking beyond Secular Anxieties And Binaries”.

Khan Yasir presented his paper “The Locomotive of History: Maududi’s Critique Of Marx’s Historical Materialism”. Yasir quoted Maududi and stated that Marx’s materialistic philosophy of history is said to have focused primarily on economic aspects of human beings and both Marx and Hegel reached at one aspect of reality while rejecting the other aspect that is spiritual aspect.

Speaking on“Muslim political Assertions: Thinking beyond Secular Anxieties And Binaries” M.T. Ansari reminded the audience that for understanding the Muslim political assertiveness in the contest of secular anxiety in a way which dialogically allows cultural and civilizational aspirations required for our increasingly post secular/ modern/ national lives.

Syed Sadatullah Hussaini, the vice President of JHI and the president of CERT in the Valedictory session addressed the gatherings and shed valuable lights on the development of the historiography. He stated that when India became a colony of British imperialism, the Indian history saw a drastic change. The Imperialist historians wrote the Indian history from a different perspective which was suited to their imperialistic tendencies especially in establishing and maintaining their rule (Raj) in India. Revisiting and exploring the hidden and distorted versions of Indian History in indeed a tedious job a true historian is expected to follow and accomplish.

Many Historical facts from time to time have been suppressed, for example in Tamilnadu, there used to be a very cordial and friendly relationship between the Tamil Muslims and their rulers. But after the arrival of Portuguese, the relationship between the ruler and its Muslim subjects underwent a change. Owing to the imperialistic and expansionist tendencies of Portuguese, the Tamil Muslims have been deliberately damaged the economic and culture this is the reason the situation of Muslim is not good . This summit will help to know the right history and will help to understand history in right way

1. Mophla rebellion was attempted an explanation by various historians in different terms. But the intrinsic Muslim character of the rebellion often refused to justify such historical categories such as peasant revolt or anti colonial revolt.

During medieval period in Deccan, there are some important dynasties which were ruledby the Muslims they are the bahmanis of Deccan after bahmani 5 important deccan states like ahmednagar, bijapur , Golconda, berar, bidar. Entire land of Deccan was ruled by Muslims though they came from Iran and though their religion was alien they encouraged the and patronised the local culture forgotten that they have came from Iran and didn’t show any discrimination towards non Muslims. In fact, they gave equal opportunity to all sections and appointed The Non Muslims on highest positions in their empire .-

iednewsdesk May 21, 2022
Going outside for just a few minutes each day can improve your overall wellness, from relieving stress to…