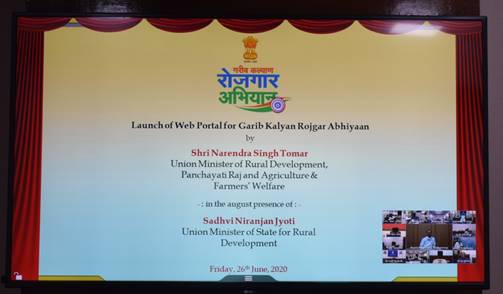 New Delhi: Union Minister of Rural Development, Panchayati Raj and Agriculture & Farmers’ Welfare, Shri Narendra Singh Tomar today launched the web portal of the Garib Kalyan Rojgar Abhiyaan through video conferencing from New Delhi. The Garib Kalyan Rojgar Abhiyaan is the massive employment generation-cum-rural infrastructure creation programme of the Government of India which was inaugurated on 20th June 2020 by Prime Minister Shri Narendra Modi with the objective of providing employment to returnee migrant workers at their native places for next four months, because of the situation arising out of the Covid-19 pandemic. The video conference was attended by Minister of State for Rural Development Sadhvi Niranjan Jyoti, Secretary, Rural Development Shri Nagendra Nath Sinha, 116 Central Nodal Officers appointed by the Government for monitoring the implementation of the Abhiyaan in the identified districts, and top officials of the Ministries and State Governments associated with the Abhiyaan.

Shri Narendra Singh Tomar expressed happiness at the launch of the portal which besides providing information to the public about the various district-wise and scheme-wise components of the Abhiyaan, will also help to monitor the progress of completion of the works being undertaken with a fund outlay of Rs. 50,000 crore in 116 districts of 6 states, where there are more than 25000 returnee migrant workers per district. Shri Tomar said that the Union Government in coordination with the State Governments has been successful in dealing with the difficult situation created by the Covid-19 pandemic. Because of the visionary leadership of Prime Minister Shri Narendra Modi, even during the period of lockdown, activities related to agriculture, small industries and implementation of government welfare and development schemes continued to function in order to alleviate livelihood problems of poor people.

Shri Tomar said that MGNREGA with an allocation of Rs. 1,01,500 crore during the current financial year is the greatest employment generator for unskilled persons. In accordance with the Prime Minister’s concerns to provide employment to lakhs of skilled workers who have returned to their native places because of the lockdown, the Garib Kalyan Rojgar Abhiyaan was launched with a funding of Rs. 50,000 crore on 20th June 2020 for which the Ministry of Rural Development is the nodal Ministry, working in close coordination with 12 other ministries of the Government of India for the 25 categories of works which are to be completed in the identified districts in 125 days. Shri Tomar said that these ongoing works which were progressing at a normal pace as per schedule, have now been fast-tracked to transform the challenge presented by the pandemic into an opportunity to create infrastructure in rural areas in a short duration.

The launch of the web portal was followed by a workshop for the Central Nodal Officers of the 116 identified districts in which Secretary, Rural Development, Shri Nagendra Nath Sinha outlined the roles and responsibilities of the various Ministries involved, and the concerned State Governments and District Administrations in implementing and monitoring the progress of the works under the Abhiyaan for ensuring their timely completion. Representatives of the Ministries of Railways, Road Transport & Highways, Mines, New & Renewable Energy, Drinking Water & Sanitation, Environment & Forests, Petroleum & Natural Gas, Telecom, Agriculture, Panchayati Raj, Border Roads Organization, and various Rural Development departments gave detailed presentations for the benefit of the Nodal Officers.