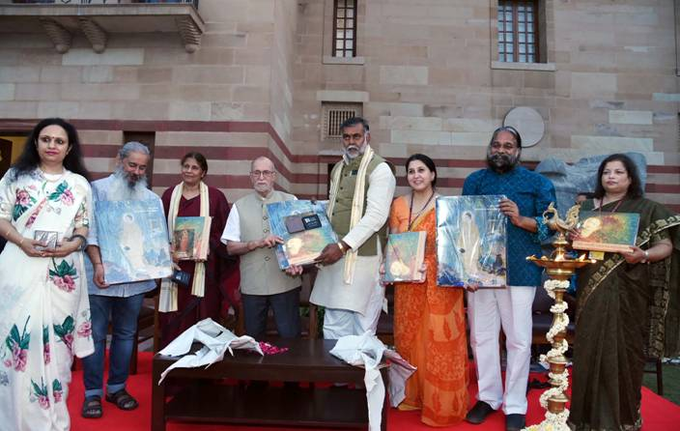 Speaking on the occasion, the Minister congratulated NGMA for beautiful restoration of Jaipur House. He also appreciated the Exhibition ‘Eternal Seeker’ which is showcasing magnificent work of Shri Chitracharya Upendra Maharath.

The show of paintings, drawings, murals sculptures, woven cloths and chairs all point to the zenith of his creativity. His interest in Buddhism brought forth many designs that were inspired by Buddhist ideology. The installations in the retrospective have been designed by DG, NGMA Adwaita Gadanayak. The Exhibition has been curated by Adwaita Gadanayak and his team.

Maharathi was author of many books too, The Book on bamboo art, “Venushilpa” was among the best. Vaishali ke Lichhvi (The Lichhvi dynasty of Vaishali), Bouddha Dharma ka Abbhuthan (The Rise of Buddhism), Indragupta were some of the other memorable works.

Following the tradition of ancient art of sculpture, he designed many noted buildings : Venuban Viharin Rajagriha, Sandarbh Vihar, Ananda Stupa, Prakrit and Jainology Institute at Vaishali, Nava Nalanda Maha Vihar at Nalanda, etc. of great interest is the outer facade of the Nalanda Railway Station, are among those specially designed at the exhibition at Jaipur House .

Central Government is fully committed for the development of Jammu and Kashmir: Shri Sanjay Dhotre

Mahindra kicks off the 13th edition of BAJA SAEINDIA 2020