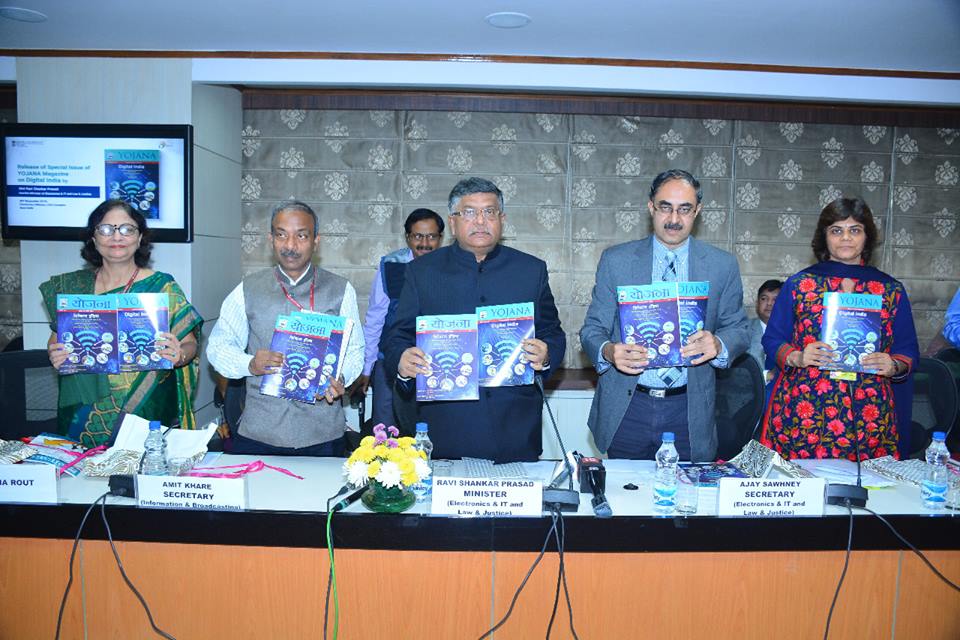 New Delhi: Digital India initiatives have gone beyond political barriers. No State or Central Government has opposed the new initiative of Modi Government that has potential to change India. Union Minister of Electronics & IT and Law & Justice, Sh. Ravi Shankar Prasad said this today while releasing Yojana Magazine special issue on Digital India. He however added that digital medium has to be safe & secure to ensure equitable spread of its benefits. Sh. Prasad said digital inclusion initiative of the Government is already being acknowledged globally.

The Minister advised I&B officials to have in-depth discussion analysis of data security & privacy aspects of digitalization in the future issue of the magazine. He said in less than five years the Government has made 307 Government services available on Umang platform and efforts are on to bring all Central & State services on this platform. Advances in the communication field have immensely enriched urban people in big cities but those in smaller cities are still dependent on informative platforms like Yojana.

The Yojana is a development monthly magazine devoted to socio-economic issues. It provides a platform for discussion on problems of social and economic development of the country through in-depth analysis of these issues. The magazine is published by Ministry of Information and Broadcasting.

It is published in 13 languages across the nation namely English, Hindi, Urdu, Punjabi, Marathi, Gujarati, Bengali, Assamese, Telugu, Tamil, Kannada, Malayalam and Oriya. The Yojana magazine has a subscriber base of over 2 and a half lakhs with a readership extending to over Eight lakhs. Yojana readership includes planners and policymakers as well as aspirants of competitive exams.

The Digital India Programme of the Government aims to transform India into a knowledge-based economy and digitally empowered society by ensuring digital access, digital inclusion, digital empowerment and bridging the digital divide. Digital identity through 122 crore Aadhaar is helping the poor receive the benefits directly into their bank account and has led to a saving of Rs. 90,000 crore. A vast network of more than 3.06 lakh of digital services delivery centres, spread across 2.10 lakh Gram Panchayats, across the country has been created to provide access to more than 300 digital services especially in rural areas at an affordable cost. Over, 1.45 crore people have been imparted training under world largest Digital Literacy Programme i.e. PMGDISHA.

More than 100 BPO units have come up in about 100 small towns of India across 20 States and 2 Union Territories. From 2 units in 2014, now India has 127 units manufacturing mobile handset and components. Promotion of Hardware Manufacturing in the Country has created more than 4.5 lakh jobs opportunities (direct & indirect).

The December issue on Digital India focuses on the initiatives of Digital India leading to digital inclusion and empowerment common person. The articles in the magazine highlight different aspects and domain areas of the digital economy of the country. These have been written by a strong set of authors representing the digital sector. Union Minister of Electronics & IT and Law & Justice. Sh. Ravi Shankar Prasad, Secretary Revenue & CEO UIDAI, Sh. Ajay Bhushan Pandey, Sh. R. Chandrasekhar, Former President NASSCOM, Sh. R.S. Sharma, Chairman, TRAI & others have contributed views on the progress in Digital India during the last four years of this Government.

The Power of technologies has grown at a pace far exceeding our ability to leverage them in key social sectors. The new era requires speed: in thought, in action, in governance and regulatory changes, this has been explained by Shri R. Chandrasekhar, the former president of NASSCOM. Shri R. S. Sharma, Chairman, Telecom Regulatory Authority of India has pointed out that the regulators have the onerous responsibility of maintaining a balance between encouraging innovation, protecting consumers, creating an environment for orderly growth of the industry as well as address unintended consequences of disruptions. Regulations should be adaptive, collaborative and impact assessment of regulation should be done.

Cybersecurity issues in digitalization and the changing paradigm of Cyber Security and methodological approach has been given by Ms Rama Vedashree, CEO, Data Security Council of India. A special article on Aadhaar as empowerment enabler and a game changer for the poor and for India, by Shri Ajay Bhushan Pandey CEO, UIDAI has also been included in the issue. Aadhaar ensures that the benefits reach directly to the deserving beneficiaries in a hassle-free manner.

It also includes the article on inclusive growth and transformative impact of Digital India leading to ease of living by Ms Simmi Chaudhary, Economic Adviser, Ministry of Electronics and Information Technology (MeitY). The dynamics, opportunities and the growth in the Electronic Manufacturing sector of India have been highlighted by Shri Pankaj Mohindroo, Chairman of India Cellular & Electronics Association.

Shri Lalitesh Katragadda, founder of Indihood, Chief Product Adviser for Avanti Finance in his article has shared his idea of how Digital India is at the heart of Poorna Swaraj. The importance of the use and proliferation of language technology for Indian languages in digital devices has been explained by Shri Rajiv Sangal, Professor, Language Technologies Research Centre, IIIT Hyderabad. Rapid advances in IT has revolutionaries the role of libraries, therefore, the needs of digitisation of traditional libraries more and more for the growth and development in education and research is highlighted by Shri Ajit Mondal, Assistant Professor, Head, Department of Education, Surendranath College for Women, Kolkata.

The magazine provides an apt platform to showcase India’s position in the digital revolution as the country is generating future pathways powered by technology and leading towards Trillion Dollar Digital Economy.

IIT Roorkee in World’s Top 250 in Engineering & Technology and tied at 3rd position at National Level in THE World University Subject Ranking 2019.