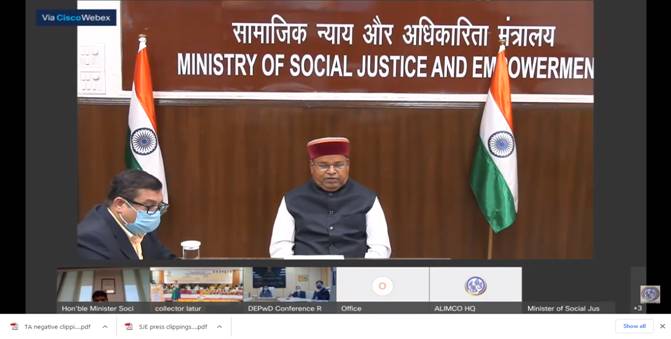 New Delhi: Union Minister for Social Justice and Empowerment Shri Thaawarchand Gehlot e-inaugurated an ADIP Camp for free distribution of Aids& Assistive devices at Block level among the identified Divyangjans under ADIP Scheme of Government of India & CSR initiative of IRFC and to Senior citizens under RashtriyaVayoshriYojana of Government of India at Darrang city of Assam through online video streaming today. Shri DilipSaikia, Member of Parliament, Mangaldoi (Assam) presided over the function in the presence of local public representatives.

Shri ThaawarchandGehlot in his address said that the Ministry of Social Justice and Empowerment is fully committed to the welfare and development of Divyangjan in our country through various measures and schemes. Keeping in view the Pandemic Covid-19, the Ministry is organizing Virtual ADIP Camps nationwide for distribution of Aids and Assistive Devices to Divyangjan. During the ADIP camps held in the country, so far 10 GuinessBook of World Records have been created. He said that several schemes have been initiated by his ministry to provide financial assistance and scholarships to Divyangjan students to pursue their education to become self-reliant. He also dwelt upon many important schemes and programs of his ministry to facilitate and help Divyangjan. He also apprised about the recent initiatives of the Government of India such as setting up of National Institute of Mental Health Rehabilitation at Sehore, Madhya Pradesh, KIRAN mental health rehabilitation helpline for addressing mental health issues, establishment of Centre for Disability Sports at Gwalior.

Total 3399 number of beneficiaries of Darrang District were provided with 6482 number of assistive appliances of different category valuing worth of Rs. 228.36 Lakhs, these assistive devices were distributed among the beneficiaries by organizing series of distribution camps at block level. Among the total 2724 Divyangjan under ADIP scheme and 321 Senior Citizen beneficiaries, the identification and registration of beneficiaries were done during the assessment camps conducted by ALIMCO in the month of July and August last year.

In addition to above 354 Divyangjan of Darrang district were identified to provide 741 different categories of aid & assistive devices under the CSR initiative of Indian Railway Finance Corporation of worth Rs. 44.70 lakh which includes 93 Motorized Tricycle, 03 Motorised Wheel chairs for orthopedically impaired and Smart phones, Smart cane, Daisy player, Tablet to Visually impaired, Behind the ear, Hearing Aid alongwith other high end devices.

The Camp was conducted as per new approved Standard Operating Procedure (SOP) issued by Ministry in wake of COVID 19 pandemic. Local Public representative, senior officials from Department of Empowerment Persons with Disabilities (Divyangjan), Government of India, District Administration, Darrang and Social Welfare Department, Assam and ALIMCO will be present during the function. Distribution was conducted adhering the guideline issued by government of

India to contain any possibility of spread of COVID-19 during the distribution of Aids and Assistive devices. Social distancing, arrangements of thermal screening for each individual, proper masking of face, sanitization use of PPE kits by the professionals reaching out the beneficiaries.

The camp was organized by Artificial Limbs Manufacturing Corporation of India (ALIMCO), Kanpur working under the aegis of Department of Empowerment of Person with Disability (DEPwD), Ministry of Social Justice and Empowerment (MoSJE), Government of India in association with Social Welfare Department, Assam and District administration, Darrang.