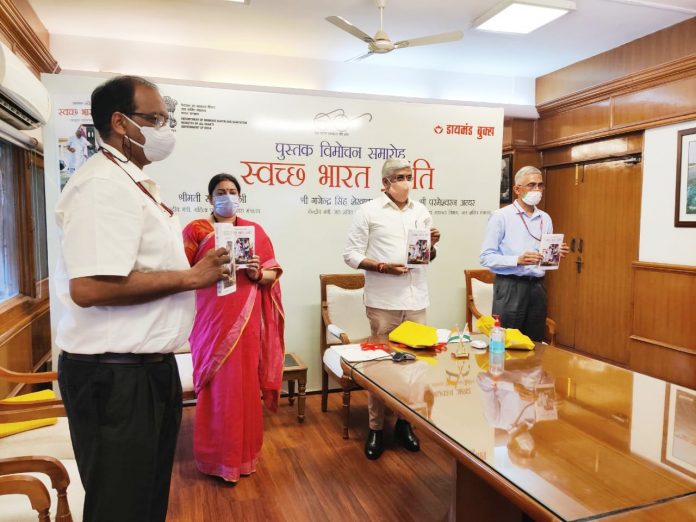 New Delhi: The book “The Swachh Bharat Revolution”, edited by Shri Parameswaran Iyer, Secretary of Department of Drinking Water and Sanitation has been translated into Hindi and published by as the Swachh Bharat Kranti. The book was officially launched by Union Minister of Jal Shakti, Shri Gajendra Singh Shekhawat, and Union Minister of Textiles and Women & Child Development Smt. Smriti Irani in New Delhi today. This was followed by a discussion on the book and the Swachh Bharat Mission by the two Ministers and Shri Parameswaran Iyer. The discussion was watched by lakhs of field functionaries of the SBM through webcasting.

The Swachh Bharat Kranti captures the remarkable journey of the SBM through 35 essays by a diverse range of stakeholders and contributors to the SBM, sharing their perspective on this social revolution. The essays are arranged in four key sections which are the four key pillars of SBM’s success: Political Leadership, Public Financing, Partnerships and People’s Participation. With a foreword by Prime Minister Shri Narendra Modi, it is a compilation of essays written by Arun Jaitley, Amitabh Kant, Ratan Tata, Sadhguru, Amitabh Bachchan, Akshay Kumar, Tavleen Singh, Bill Gates amongst others.

Speaking on this occasion, Shri Gajendra Singh Shekhawat spoke about how India had become one of the leaders of sanitation in the world and that many countries are now learning from India’s experience of getting over 50 crore people to start using toilets and stop defecating in the open in just five years. He said that he was happy that through the Swachh Bharat Kranti this journey could be shared with lakhs of readers in the heartland of India.

Smt. Smriti Irani said that she was proud of the leadership role that women played in making the Swachh Bharat Mission a true Jan Andolan. She said that the SBM was a true example of Nari Shakti, and that women will continue to lead the next phase of the SBM to ensure that the gains that have been made so far are sustained, and that no one resorts to open defecation in future. The Ministers then answered questions of swachhagrahis, field functionaries and state government officials through video conferencing.