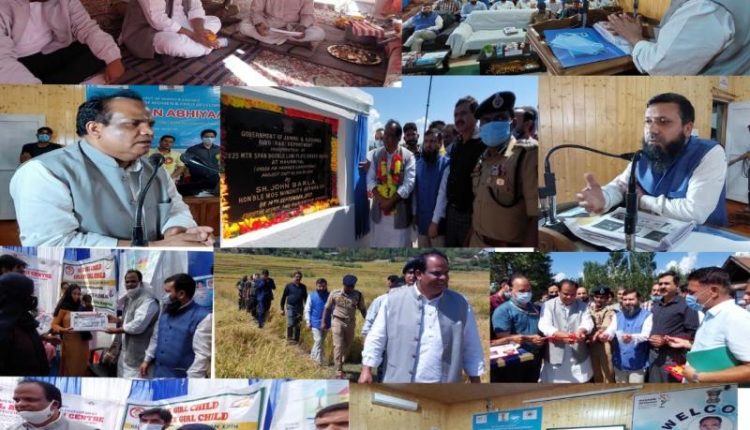 KUPWARA : Union Minister of State for Minority Affairs, John Barla today said that time has come when benefits of development percolate down to the people in far off and border areas like Kupwara. He said that Kupwara as a border district gets special attention from the Union Government headed by Prime Minister Narendra Modi by way of funds flowing under Aspirational District since 2018.

The Minister, who was on a two day visit to Kupwara district under union Government’s public outreach programme, inaugurated Double Lane Bridge at Khumriyal in Kupwara district. The bridge costing Rs.614.98 lakh connects Lolab Valley, with the rest of the district.

The Minister also flagged off the Ambulance of Chinar Charity Foundation (local NGO) devoted as free service for poor cancer patients of the area. The Minister said that the Government of India always encourages social service and there are a number of schemes like DARPAN for the financial support of NGOs.

The Minister visited the paddy fields of Kalaroos and inquired from locals about the availability of job cards and the benefits of farmer welfare schemes. The Minister said that the Government of India has a number of welfare schemes for every section of the society and insisted people to get benefits from these schemes properly.

The Minister, in the afternoon inspected stalls of ICDS, Rurban Mission, Social Welfare, Handicrafts and inspected the quality of different items of skill development including Kani Shawls, Crewl and knitting items at Government Degree College Kupwara. The Minister also participated in the Poshan Abhiyaan activities, the PM’S overarching scheme for Holistic Nourishment at the auditorium of the college, organized by ICDS department.

Addressing the function, the Minister complimented the ICDS workers for their commendable job during the challenging times of COVID-19. He said that he was impressed by the work culture of ICDS in Kupwara and wished that the same should be replicated in other parts of India.